Why Warehouse 13 Is Moving To Showcase 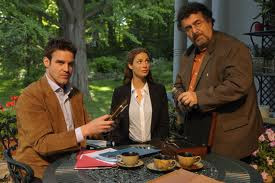 Consider the strange case of Warehouse 13.
The series revved up in 2009 and first ran on CityTV but to weak ratings.
For season 3 it's getting better promotion and a berth on Showcase and why not?
Is it Canadian or American?
Well, it's shot in Canada and the local stars include Aaron Ashmore and Saul Rubinek along with such Americans as Eddie McClintock and Joanne Kelly.
The show is watchable but wholly derivative. In the U.S. it's one of the staples of the SyFy network. Up here its shenanigans might confuse viewers used to fact based shows.
The premise finds two Secret Service agents transferred to "Warehouse 13" after saving the life of the President. It's a massive structure set deep within the mountains in South Dakota where every object and artifact of magic and even whimsy gets stored.
Rubinek overacts wildly as the eccentric curator of the collection named Eddie.
Pete(McClintock) and Myka (Joanne Kelly) are busy chasing down every and all reports of fantastical situations and supernatural happenings. And naturally the U.S. government officially refuses to admit such a facility exists.
Made by Universal Cable Productions, the series sports high production values but the situations are played more for laughs than thrills. The cast are allowed to mug furiously to cover up plot deficiencies. But just try to stop watching --there's something about this band of sleuths that's entertaining.
I think the series is thriving because of the amiability of the stars particularly McClintock and Kelly who refuse to take anything seriously. He's convinced every female is instantly falling for him. She's a by-the-book agent who at first seems impervious to his charms.
Don't take any of it seriously and you might like this show although I think it really belongs on Space.
And this season Aaron Ashmore comes onboard as a new agent--and a gay one at that -- with the ability to tell whether or not people he's interviewing are actually liars. But the show is so plot oriented there's never been much time to explore relationships.
So watch Season's 3 debut Thursday night at 10 on Showcase and tell me what you think.
WAREHOUSE 13 PREMIERES ON SHOWCASE THURSD. AUG. 31 AT 10 P.M.
MY RATING: ***.

You put that "Rubinek overacts wildly as the eccentric curator of the collection named Eddie" In the show however the character name is "Arty". Short for "Arthur Nielsen".

Joanne is not american. She's Canadian born and raised