The Vikings: Back For Season Two 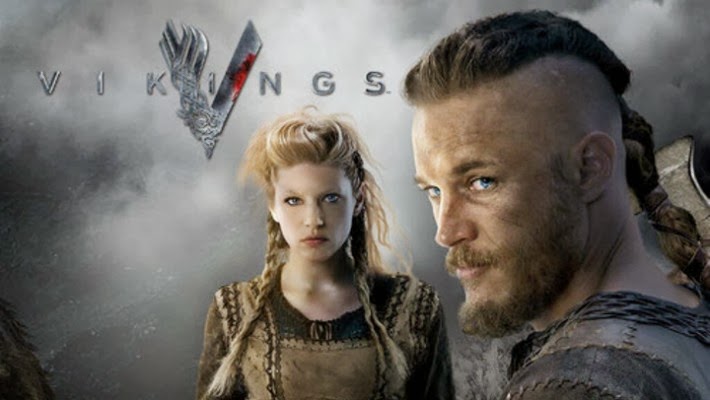 The Vikings are back for a second season of mayhem, betrayal and lust.
This ambitious Canadian co-production returns to History Thursday night at 9 and it's a pretty solid return on all fronts.
First of all there's the majestic visual splendor of the Norse country even if this miniseries was largely filmed in the fjords of --Ireland.
The creator, Michael Hirst, resists the obvious chances at parody and has a big picture vision in his account of betrayal, family unity, and an emerging nation that is about to be challenged by the forces of Christianity.
Don't forget Hirst also created The Tudors which had the same bold themes as its structure.
Starring is the weathered Travis Fimmel, once an Australian model with perfect features, now a seasoned actor who leads a cast through many emotional ups and downs in the first new episode.
New this season is Alexander Lidwig (The Hunger Games) as Ragnar's growing son Bjorn. Also new: Linus Roach who last starred on U.S. TV in Law & Order --he plays the ambitious King Of Wessex, determined to stand up to Ragnar in all matters.
In terms of old and new shows returning with new episodes one critic has dubbed February as the new January
Meaning the Vikings has a lot of competition to garner its anticipated audience.
Time certainly has advanced with Season Two --the plot segues right into an epic confrontation between brothers Ragnar and his king (Donal Logue) arraigned against Ragnar's physically huge brother Rollo (Clive Stanton).
Canadian cast members include Katheryn Winnick as first wife of Ragnar named Lagertha. She has fought in the shield war beside her husband and brothers and now must face his infidelity.
But she is strong in her own right --her decision of how to respond is powerful and determining --much like all that she does.
Other Canadians in the cast include Jessalyn Gilsig (as Siggy) and Donal Logue (as King Horik).
Canadian directoers include Ken Girotti, Jeff Woolnough and Kari Skogland,
And the Canadian executive producers include Sheila Hockin (Queer as Folk) and John Weber (The Tudors) for Canadian film company Take 5 Productions.
The pedigree may be complicated but The Vikings should hold your attention with its outstanding outdoor photography and complicated, nuanced story telling.
THE VIKINGS RETURNS TO HISTORY ON THURSDAY FEBRUARY 27 AT 10 P.M.
MY RATING: ***1/2.


Posted by james bawden at 5:21 PM No comments: The only time I interviewed Maximilian Schell was in an L.A. hotel room in 1986 when he was promoting his appearance in the NBC miniseries Peter The Great.
It was hardly one of Schell's finest hours--the miniseries was ragged and Schell had to withdraw before filming wound up meaning in some key scenes an extra took his position.
"The story of my career," beamed Schell who refused to be battered by his international stardom.
Schell died unexpectedly earlier this month aged 83.
Described in obits as "Austrian by birth, Swiss by circumstance" Schell spent much of his movie career playing a wide assortment of Nazis.
"I'm fully aware of the irony of my situation," he joked.
He was born into a prominent family in Vienna in 1928. His mother was an actress, father a playwright and Roman Catholicism their religion. In 1938 the family fled to Switzerland and young Max attended schools in Basil and Zurich.
He served in the Swiss army and at 22 became a professional actor.
In 1958 he played a challenging Nazi officer in Edward Dmytryk's film The Young Lions which starred Marlon Brando, Dean Martin and Montgomery Clift.
"My first Nazi," he said. "The first of many"
Like other postwar German movie stars including Hardy Kruger and Horst Bucholz Schell was expected to play Nazi devils over and over again.
Then came his fascinating portrait of the young German defense lawyer Hans Rolfe in Judgment At Nuremberg which he played both brilliantly in the live TV special and again in the 1961 movie which won him an Academy Award.
Several huge mistakes followed: in Five Finger exercise (1962) and in The Condemned Of Altona (1962).
The caper comedy Topkapi rescued his career and showed an aptitude for comedy which was seldom exploited.
He was back playing a Nazi in Counterpoint (1967)  where he forces orchestra leader Charlton Heston and troupe to play for their release.  In 1974 in The Odessa File he was a concentration camp officer. In 1975 he was the Man In The Glass Booth --a Nazi war criminal kidnapped and taken to Israel for trial.
Later he could direct movies (The Pedestrian) and made a fine documentary on Marlene Dietrich that was difficult to finish when his star suddenly decided not to appear on camera.
Later on he made a similar film about his haunted sister Maria Schell who had once been a prominent film star in her own right.
He kept right on working into his eighties often in mediocre fare. He said he'd done Peter The Great for the money and regretted it wasn't better.
And as far as being a great screen Nazi he sighed and then laughed. "At least it pays the bills."


Posted by james bawden at 8:23 PM No comments: