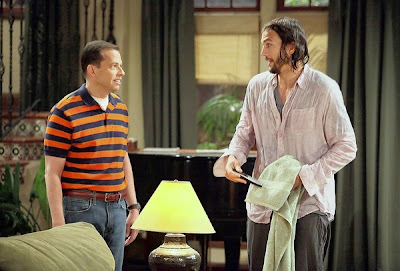 My CBS sources are doing the twist over the huge ratings for the revamped Two And A Half Men.
Just a minute, fellows! That was a huge number, I'm granting you, but what will it be the next week when the reality sets in. Most of the people I talked to who saw the premiere didn't like it very much at all.
But the wave also hit CBS's How I Met your Mother at 8 which had its best ever season premiere.
At 8 NBC's Playboy Club really tanked and since it is a serialized drama it's unlikely more viewers will tune in for next week's episode.
And at 9:30 the amiable new sitcom Two Broke Girls also on CBS attracted 19 million curious viewers giving it a great sampling.
Against this ratings juggernaut there was ABC's Dancing With The Stars which still attracted a more than respectable 18 million viewers.
Viewers seemed most curious about Chaz Bono who showed that with parents Sonny and Cher he certainly has inherited dancing steps.
At 10 p.m. CBS's Hawaii Five-0 got stomped on by NBC's Castle which attracted an additional million viewers over its weak CBS rival.
CTV sources are saying Two garnered 4.9 million viewers which may be a new high for a sitcom. It's bigger than even Big Bang Theory gets.
On CBS the number was over 27 million which was once what a hit like Beverly Hillbillies would be pulling in.
In fact I'm willing to bet Playboy Club might be the first prominent new series to get toppled.
More ominously for the future of the U.S. networks Business Week reports a decline in the number of actual viewers this fall tuned into satellite or cable TV.
The phenomenon is called "cord cutting" and means an increasing number of younger viewers are declining to pay exorbitant monthly cable or satellite bills and are watching their programs solely online. The college crowd watch online in their dorms and when they go out on their own decline to hook up to conventional TV services.
Posted by james bawden at 11:10 PM