Christine Cushing's Fearless In The Kitchen Moves To OWN 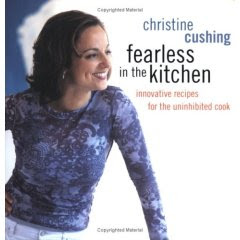 "Boy, we have some pretty awful cooks this season," laughs Christine Cushing as her cooking series Fearless In the Kitchen moves from W to OWN for its third season premiere.
"It makes for very exciting TV, I predict. And the twist this year is simply we're using more partners than ever before."
In each of the 13 half hours viewers will be introduced to hapless participants who are just plain lousy in the kitchen.
And by the end? "I'm not saying great chefs will be made," Cushing says on the phone from her editing suite where she's still fine tuning new shows. "But viewers will certainly see a big difference, they'll watch as our guests try and confront their fears about cooking."
In this day of specialized cooking series where great chefs are touted or participants cook in a kind of Survivor Kitchen mode Cushman offers a pleasing difference.
"I'm there to help. I can also tease, cajole, get them going. What I don't do is shout, anything like that. Because it's not me. I don't think that stuff makes for enjoyable TV. It is sort of disturbing."
A lot depends on the selection of the right guests.
"And we really get a great couple in the first new show, a father and his son Peter. Like so many we found them at a travel show --we also get some at home shows. And Peter just came up and said he never learned to cook and his dad was just as bad and their jokes and their energy --that half hour really worked!"
To get those precious 21 minutes of actual footage "well, it took 21 hours of shooting. No, I'm not kidding. We never know at the time what we'll be using, how the session will go, and then comes the editing. So much good stuff has to be discarded. After all we're telling a story that is still unfolding."
Front and center of each episode is Cushing's test kitchen which is laid out to accommodate TV lights and cameras. She says her method is to quickly get the guests accustomed to the cameras and crew and hope after a few moments the subjects will simply settle down.
"It worked this time --pretty son Dave and Peter were joking up a storm. I had them busy preparing a seafood soup and they did almost everything wrong. I asked my producer 'Please don't make me taste that!' But he said it was part of the show. How was it. Utterly awful, like dishwater. Blah!"
From the depths it was Christine's job top raise them to the heights. "By teaching a healthy respect for the food, where it came from, how it has to be managed. I want them to explore but I'm also there to teach."
At one point she takes the men to an actual pig farm and orders them to muck up in one pen --it's one way of showing where food comes from but also gets the boys working in tandem.
I won't give away the final elegant dinner they must prepare --it includes rack of lamb --but it's an adventure for both as well as viewers.
Cushing despite her youth and vigour is a ten year veteran of the TV wars. She effortlessly sports the kind of warm personality that makes guests trust her. And she knows what she's speaking about --she's toiled in such Toronto restaurants as The Four Seasons hoteland Scaramouche and has published two best selling cookbooks including Dish It Out.
Made by Fushion Television for Corus Entertainment Cushing's series was quickly snapped up by Oprah Winfrey's OWN network in Canada and there's a deal going on to bring it also to U.S. Viewers.
"The first one works so well, maybe in the next batch I should only do pairs. I want viewers to learn as much as these two are doing on camera."
THE THIRD SEASON DEBUT OF FEARLESS IN THE KITCHEN IS ON OWN THURS. SEPT. 8 AT 7:30 P/M.
Posted by james bawden at 12:08 AM