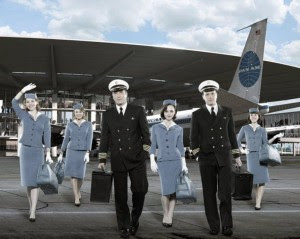 What I'm hearing from friends is that the premiere episode of Pan Am just didn't make it for them.
Call it Mad Men Lite so far.
The new ABC series has a bad time slot --it runs Sundays at 10 p.m. opposite CBS's venerable but still potent CSI:Miami and NBC's powerhouse NFL football.
I met the four actresses playing the stewardesses during the CTV fall launch.
Best know is Christina Ricci but the others are just as talented: Margot Robbie, Karine Vanesse, Kelli Gardner.
Set like Mad Men in 1963 the serial follows the lives of the four girls in the Golden Age of travel.
"It was when people actually dressed up to travel in an airplane. It was very exclusive and glamourous," Robbie told the TV critics that day.
All the accoutrements of life almost 50 years get developed --this a very expensive series to make.
But unlike Mad Men it can only go so far --remember this is network TV.
CTV has gone all out to promote the new show even going as far as to send me a PAN AM flight bag complete with all sorts of goodies.
And this is the one TV critics everywhere have been hailing as among the season's best new shows.
The pilot failed on most counts --it was disjointed and diffuse but that often happens when a new series debuts. It should improve over the next few weeks.
Pan Am gals back there had to be educated and very beautiful. One gets demoted for not living up to the wardrobe standards. Another has her girdle snapped by a superior --girdles were part of the look back then.
I can see this one developing as a bout of escapism but it needs a lot of work to get up to scratch.
Since the 1960s terrorism and the high price of oil have made air travel less an adventure than a strenuous ride filled with problems.
Mad Men was a dazzlng recreation of a past time but it was filled with nuance and blistering criticisms of its characters. Pan Am is all surface cuteness. It's not at all compelling --so far.
So far it's more Charlie's Angels than anything else.
However on the first night out Pan Am did OK in the ratings bolstered by the overrun of CBS football.