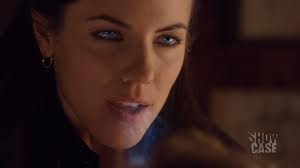 This is the time of the year when Americanseries new and returning inundate Canadian TV networks.
But Sunday night the two returning series coming back with new episodes at least have buckets of Canadian content.
First up is Season Two of Lost Girl. It's Toronto made and stars Kristen Holden Ried, Anna Silk (Billable Hours) and Ksenia Solo in a very appealing blend of sci fi nonsense, sheer whimsy and ancient myths and folklore.
Silk is very beautiful in the lead as the audacious BO who when she kisses somebody kills them just like that.
Then there's the police detective Dyson played with panache by Reid who is actually a Fae --a sort of vampire I'm guessing with a dash of werewolf on the side.
Just to be reassuring this is not Buffy land, nor Twilight time, it has an unique style of its own.
Sets and camerawork are up to movie standards and the three leads are obviously enjoying acting with each other.
Did I understand the plot at all? Nope. But I persevered and watched to the end and never once was bored.
For Reid it's a big step forward since I first interviewed him on the set of the late lamented CBC soaper Riverdale. But the series wasn't made for me --it's obviously been carefully crafted to garner in all those True Blood fans out there.
Because of its obviously derivative nature it's a bit of a challenge to get overly excited about Lost Girl.
But there are no weak points --the plot crackles along and the first week's look at an itinerant circus where the denizens are up to no good was pretty smartly staged.
Bo's attitude to men is ambiguous --nothing here is plain and simple.
Lost Girl premiered a year ago to pretty solid reviews and the second season opener may help grow the ratings. Made by Prodigy Pictures and filmed in and around Toronto the show has a look all its own.
An hour later another Canadian made cable drama, Covert Affairs, also returns for its Second Season.
Made in Toronto for USA cable network Covert Affairs highlights the beauty of Piper Perablo as 28-year old Annie Walker who gets picked right from rigorous CIA training and plopped out to the field as a fully functioning agent.
Walker has all the physical training to acquit herself in dangerous situations but she's also darned attractive. Her technical backup comes from Christopher Gorham (Ugly Betty), a brilliant technician despite the fact he's blind. Buit he's awfully funny and supportive.
Kari Matchett returns to Toronto as Walker's CIA assigner Joan Campbell and Peter Gallagher is an ambiguously powerful lawyer. From Heroes as another supportive agent there's Sendhil Ramamurthy.
First new episode has Walker coming to the aid of an Estonian tennis star and she seems to have matured after a first season of battling the baddies.
Covert Affairs is strangely lightly likable despite its serious subject matter.
LOST GIRL SEASON 2 PREMIERES ON SHOWCASE SUND. SEPT. 4 AT 9.
MY RATING: ***.
COVERT AFFAIRS SEASON 2 PREMIERES ON SHOWCASE SUND. SEPT. 4 AT 10.
MY RATING: ***.