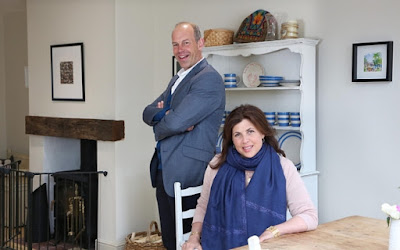 People are always asking me if a Canadian TV series ever got spin off or remade for American TV.
And my answer was always the same: yes, but....
It just so happens that CBC's Fifties hit The Plouffe Family (which ran in both French and English version starring the same cast was later remade into the U.S. TV stinker Viva Valdez!
Outside of that I'm hard pressed to come up with other examples.
CBC-TV's venerable Front Page Challenge was bought by CBS as a vehicle for news star Mike Wallace but an actual series never appeared.
Recently CBC-TV's Intelligence was first sold to Fox and then to CBS and various pilots were commissioned but it never made it out of development stage.
Now I'm about to celebrate Canadian TV's most successful series.
Wait for it --it's Love It Or List It.
I kid you not.
The original show was made in Toronto and the premise was basic but fun. Designer Hilary Farr tried to redo a creaking house on a tiny budget while her rival, realtor David Visentin took the quarreling couple out to see various houses he hoped to move them into.
The fact the two participants heartily disliked each other (at times) made it fun if predictable fare.
Farr used the same crew, came up against all types of obstacles and always seemed to be knocking items off her client's "must"list.
Visentin behaved like an attack dog and often got ticked off --comically speaking--about the outrageous demands put on him.
It was inevitable W Channel would commission a spin off and eventually we got Love It Or List It Vancouver (retitled in the U.S. as Love It Or List It Too).
This time I was less enthusiastic.
Designer Jillian Harris is lush and lovely and realtor Todd Talbott is very laid back.
But those dudes out in B.C. live in a paradise and none of the homes shown are really in need of great repairs.
However Mrs. Clinton has been quoted as saying she loves both shows so there.
Another spinoff was commissioned when the LIOLI cast and crew were dispatched south of the border. These days Hilary and David are acting more like clowns.
They're unfamiliar with the territory and Hilary doesn't know the fix-it teams she's supposed to be working with.
The same fate befell Property Virgins which was fine as long as Toronto's pert ()()()( had the show.
When it was moved south the American realtors seemed merely crass and exploitative.
And now we have yet another spin-off--Love It Or List It UK starring these refugees from Location,Location,Location Kirstie Allsopp and Phil Spencer..
I finally got to watch a new episode and I'm not quite sure what to think.
First there's nothing but a bit of faux antagonism between Kirstie and Phil, they've worked together so long and they know each other inside out.
So there's no tension. And also Kirstie seems less involved in the redesign than Hilary was.
A very nice East Asian couple were profiled and were quite endearing --housing in London seems twice as expensive as Toronto (which is expensive enough).
I just don't know, I much prefer the original but that's just the way I am.
How about you?

which I can never watch these days --the U.S, realtors taking iover from Canada's *(*(*(*( were crassly exploitat  the border.
The same fate befell

Posted by james bawden at 11:21 PM No comments:

Reefer Riches: Timing Is Everything