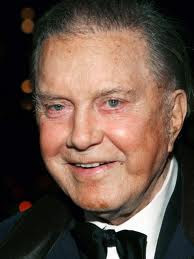 What I liked about the late Cliff Robertson was his sheer ordinariness.
Sure he was handsome in a square jawed sort of way.
But he never scaled the heights of super movie stardom as happened to such contemporaries as Paul Newman and Jack Lemmon.
Robertson who died on Sept. 10 a day before his 88th birthday once told me he'd survived for decades in Hollywood because "I looked so American to the casting directors I guess."
But what a range of famous Americans he played: John Kennedy, Hugh Hefner, Buzz Aldrin, Henry Ford, Cole Younger.
A group of us shared lunch with Robertson in 1984 in Phoenix, Arizona, where CBS was having its fall TV preview for visiting critics.
Robertson by this time was doing mostly TV --where he'd started in the 1950s--and had signed for a year of guest appearances on the CBS night time soap Falcon Crest at $50,000 an episode..
And why not?
"The money's good, the exposure is tops and people of my generation sit home watching TV these days," he said with a relaxed laugh.
He was born Clifford Parker Robertson in 1923 in La Jolla, California, the son of wealthy parents. He studied English Literature at Antioch College and later worked as a reporter for the Springfield Daily News and served as a merchant marine in World War II.
He joined a repertory company in the Catskill Mountains and he then landed a small role in the touring company of Mister Roberts and another in The Wisteria Trees. In 1955 he signed with Columbia Pioctures and debuted in Picnic opposite Bill Holden and Kim Novak.
"My big break came with my second picture, Autumn Leaves (1956) starring the great Joan Crawford. I know what people say about her but she was entirely professional and saw to it that I was promoted by Columbia."
in 1957 came his first lead in The Naked And The Dead. then he had his biggest ever hit in Gidget (1959) which he hated but which made him a top box office attraction.
In 1963 he was cast as young John Kennedy in the wartime film PT 109 (1963) --"President Kennedy saw it, liked it but mentioned I had my hair parted on the wrong side of my head! Then he was assassinated and nobody had the stomach to see it after that."
In 1968 Robertson won the Oscar for Charly but he was filming in the Philippines and couldn't make the awards ceremony.
In 1977 while routinely reviewing all his earnings for income tax purposes Robertson noticed a check for $10,000 that he did not remember cashing.
He discovered his signature had been forged by Columbia executive David Begelman
Robertson was warned by studio heads not to press charged or he'd be blackballed --he refused and Begelman went to jail for forgery.
"And I did not work again in that town for seven years," Robertson told me.
Robertson who remained a very charming guy --I later got a hand written note of thanks from him for the story I wrote about his joining Falcon Crest.
He was married twice --first to Jack Lemmon's ex-wife Cynthia and then to actress Dina Merrill.
I always liked him in whatever he did.
Posted by james bawden at 11:18 PM