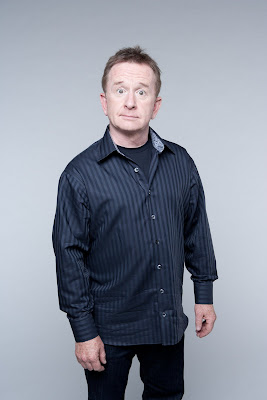 So here I am wandering through Toronto's increasingly decrepit subway.
And I can't help but noticing the multiple posters for new CTV and Global TV series debuting this fall.
It's strange but I can't find a single poster promoting a Canadian series.
And both CTV and Global are Canadian networks.
That leaves the heavy lifting to CTV and the cable weblets.
Which means it's important to welcome back Ron James for his third season of comedy capers starting on CBC Friday Sept. 16 at 8 p.m.
I've watched the preview DVD and am liking what I see.
Ever since I first interviewed James for his short lived Canadian sitcom Blackeye I've been a fan. And in my estimation he truly honed his craft through hundreds of one night stands across Canada in the past decade..
When his show debuted I had mixed feelings --after all the estimable RCAF was just then getting cancelled.
But James wisely refused to stray into political commentary --CBC already has Rick Mercer and This Hour Has 22 Minutes for that.
His sketch pad is all of Canada, He doesn't overly dwell on Toronto but goes out touting the advantages of all kinds of Canadian locations.
"This year I'm starting out by saluting Kingston," he chuckles on the line from his comedy offices. And James really gives it to the denizens, mentioning the area has nine prisons for starters.
"I'm going to take on Owen Sound. Look Out!" he laughs. "Then Kelowna, then Banff. There's lots of comedy material in all these towns."
For me the first episode seems tightly edited, better written, a seamless mixture of a funny monologue and competing sketches.
Says James: "The first season it was all touch and go. We actually did the skits as we were taping each show, it was real pandemonium for me. "
This year James's team wrote the monologues and commentaries first and then stitched in comedy sketches that completed James's ramblings.
So he begins with his ideas about weekend fanatics who dress up in period gear and prance around recreating battles or sci fi encounters.
And then on comes a very lively, well researched skit about a group of Southern Confederates in costume headed by a bearded James going up against various wizards and dragons headed by guest Kids In The Hall's Kevin McDonald.
I won't give away too much except to say it certainly works and is well edited and fast paced.
Remembers James :"It was shot in Summerhill Park and the call time was for 6 a.m. Temperature was boiling hot. I had a fake beard glued on and the glue ran and it was very itchy. It all had to be staged with the extras and it just worked out so nicely."
There's also time for a L'il Ronnie segment about head lice that had me itching --I noticed the voice of mom was supplied by the talented Linda Kash.
"I think what we're doing is breaking down the fourth wall, making everything flow as one and it's a great feeling when it happens. Later we'll venture to PEI and examine the twin phenomena of potatoes and Anne."
The show is working more the way James always hoped it would work and he's always generous in giving guests their fair share of the laughs.
And BlackFly is even running on a cable network --I recently caught one episode at around 3 a.m. and it still makes me laugh.
I tell James I recently heard a lady asking in a downtown DVD store where the DVD for Ron James's show was. The sales clerk merely shrugged.
Season 3 deserves a DVD release, I tell you. Better pass that word along to the CBC bureaucrats.
SEASON THREE OF RON JAMES PREMIERES ON CBC FRID. SEPT. 16 AT 8 P.M.
MY RATING: ***1/2.
Posted by james bawden at 11:40 PM