Against The Wall: New "Canadian" Drama On Bravo! 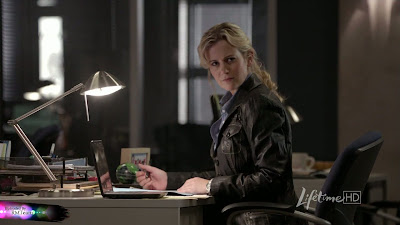 This is shaping up to be the TV Season of the "New Woman"
Yet another cop drama extolling the virtues of an independent female debuts Wed. night at 9 on Bravo!.
Against The Wall is pretty darned good although wholly derivative of other, bigger network series.
Rachael Carpani is well cast as a struggling police woman Abby Kowalski who at 30 finally gets to be a detective --only its in the hated and feared Internal Affairs division.
If Carpani looks familiar she starred for eight seasons on the Australian TV series McLeod's Daughters.
Here she has mastered a North American accent with apparent ease.
She's got a tough cop (Treat Williams) for a father and all three of her brothers are Chicago beat cops.
And if that doesn't somehow remind you of Blood Brothers then you haven't been watching the CBS drama that stars Tom Selleck.
And on the job Abby finds herself coupled with a toughie, a street smart female detective who shows her the ropes. Think Cagney And Lacey and you're getting warm.
Set in Chicago, the series is getting filmed in Toronto and that's not even a first. CTV's past hit Due South was set in Chicago but also filmed here.
It's a tradition that goes all the way back to Night Heat --look for the streetcar tracks, the Ontario plates on the taxis, and in the very first scene is instantly recognizable as Front. Street West. And I also spotted a passerby buying a copy of the Toronto Star from a coin box.
But I digress. Despite its bag load of derivatives Against The Wall works because of some top notch actors.
As Abby's parents there are two experienced actors with hit series under their belts: Williams and Kathy Bates from PIcket Fences
Catch the droll scene where Baker forces Williams to eat cereal for breakfast after he picks a fight with daughter Abby..
And because this is treasured Cancon lots of fine local actors get chances to shine: Steve Byers(Falcon Beach), James Thomas as brother Donnie, Andrew Walker as boyfriend Brody, and Mayko Nguyen (ReGenesis) who's also co-starring in Rookie Blue.
The series is long on character development, short on the usual police histrionics. In the first episode Abby is investigating a charge of police brutality lodged against two officers who were caught in as barroom brawl.
But that part of the hour seems perfunctory. Against The Wall really works by exploring the family dynamics: a disagreement in church between Abby and her mother, the anger of her father who didn't want her to join the department despised by most cops, and Abby's ambivalence about hooking up with an old friend.
Carpani has the sort of personality that makes you want to get interested in her character.
The series was primarily made for the U.S. cable network Lifetime which specializes in stories of the empowerment of women and on this basic level Against The Wall truly delivers.
Technical details are on a par with any network series. Against The Wall will surely find a willing female audience out there willing to watch this thirtysomething detective find her bearings.
AGAINST THE WALL PREMIERES ON BRAVO! ON WED. SEPT. 7 AT 9 P.M.
MY RATING: ***.
Posted by james bawden at 12:46 AM