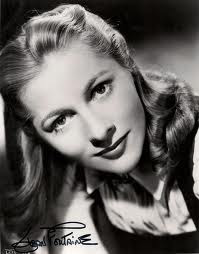 I'm going to play hokey Wednesday night for a few hours.
Starting at 8 p.m. I'll be watching an old movie that's new again.
I've watched enough of those bad new series currently flooding TV networks.
The film is The Constant Nymph and it hasn't been seen since its release in 1943.
Nobody has seen it because the author of the book Margaret Kennedy insisted that upon her death the film could only play in museums and libraries.
The one time I interviewed its star Joan Fontaine she said she hadn't viewed it either since 1943.
Well, Turner Classic Movies which owns the rights later arranged a private screening for Miss Fontaine.
She told the press she staggered out into the light and felt she needed a drink.
The Constant Nymph was directed by Edmund Goulding and besides Fontaine the cast includes Charles Boyer, Alexis Smith, Dame May Whitty and Charles Coburn.
What a cast! Miss Fontaine garnered an Oscar nomination, she was that good.
And she journeyed to sister Olivia de Havilland's home studio Warners to make it. Could that have been the start of a sisterly feud that sizzles and crackles to this day?
"It certainly didn't help," laughed Fontaine with glee.
The one time I was at Alexis Smith's Hollywood home I asked her about the film and she shrugged.
"I was 22 playing a sophisticated 35-year old and it was my best performance. But nobody but nobody has seen it in decades."
Smith has passed but Fontaine, now a feisty 94-year old, must be in heaven about this coup.
But The Constant Nymph is only one of a number of long lost films TCM is trying to find.
Sunday night I watched the 1941 version of Back Street styarring Margaret Sullavan and Charles Boyer --it hasn't been on any Canadian TV station since 1970.
The one phone interview I ever had with TCM's master historian Robert Osborne I asked what other forgotten films he was hoping to re-discover,
One title he gave me was the all star 1933 drama Night Flight.
WEll, Here's the cast: Clark Gable, Myrna Loy, Helen Hayes, John Barrymore, Robert Montgomery.
Warners has just released it on DVD for the first time after years of negotiating over the rights..
TCM owns the TV rights.
So how about it TCM?
POST SCRIPT: I saw the film which was a box office failure in 1943 although Joan Fontaine received an Oscar nomination. It's of a high style of glossy film making that passed from the scene a long time ago. The accoutrements are lavish including a town home in London overstuffed with antiques. Being out of view for 70 years means the film has a reputation it can't really live up to. But it's a lot of fun rev-siting such stars as Alexis Smith, Charles Boyer, Dame May Whitty, Charles Coburn all of whom have passed in the intervening decades. Only Fontaine at 94 is still with us.
Posted by james bawden at 11:00 PM

There is also a 1923 Hitchcock film, The White Shadow, newly re-discovered in New Zealand.
link: http://mysteryreadersinc.blogspot.com/2011/09/lost-alfred-hitchcock-movie-to-be-shown.html