"This is it --my last TV production," sighs legendary TV producer Pat Ferns from his B.C. headquarters.
"But I couldn't go out with anything more challenging.  I've spent the better part of a year finishing the French. German and Canadian versions  of Listening To Orcas --all of which are different."
When I first jumped into TV criticism in 1971 at The Hamilton Spectator Ferns was one of the biggest producing names in the business.
The very next year I flew to Montreal and boarded a rented car driven by publicist Pat Bowles to travel deep into the Quebec countryside and the site of the new mini-series The Newcomers.
Imperial Oil pumped millions into this project produced by Ferns and partner Dick Nielsen and each hour dramatized a different era of immigration to Canada.
A New France settlement had been meticulously reconstructed to show how our first settlers depended initially on the aboriginals to sustain themselves through the difficult winters.
Ferns and partner Dick Nielsen seemed to be everywhere in those days with bold, innovative projects that were outside the humdrum boundaries of weekly TV series.
And Ferns agrees with me this tandem worked because each was so very different they complemented each other.
Ferns was quite brilliant but taciturn with a very clear vision of what he hoped to achieve in every production.
And Nielsen was a wild man of ideas forever churning out synopses and challenging the boundaries of ordinary TV landscape.
And they both excelled at a time there were only 10 competing TV channels.
"I just felt CBC had a tremendous responsibility in bringing culture to television that can't be matched today," he says.
Part of the problem lies in the breakup of the huge audiences --in a 100 channel universe there are few outlets with the kind of audience to support cultural productions.
"We had left CBC to form a company (Nielsen Ferns Productions) and were able to do things that a single network couldn't afford to do and we could sell to other markets and that was encouraging."
I remember one NF film I was on was Quebec Canada 2005 which was put together by Nielsen and mostly shot at the King Edward hotel.  All the principals were in the Toronto Star newsroom for a shot or two and they included Martha Henry who I chatted up at my desk.
Nielsen Ferns was finally purchased by the Toronto Star (in 1976) as a production company but the federal government was not favourable to having companies owned by media giants.
So these days if a high school teacher wishes to screen a copy of The Wars to show to the class Torstar reluctantly sends out a tattered VHS copy demanding it be returned within days.
So Nielsen andd Ferns founded a second company Primedia and a whole host of sparkling new productions came forth : Glenn Gould's Toronto, the four hour mini-series Glory Enough For All, Heaven On Earth (written by Margaret Atwood) and bought for Masterpiece Theatre.
In 1995 Ferns decamped again to recharge the Banff Television Festival and turned it into an internationally renowned centre which was much admired by talent on all sides.
About the current state of Canadian TV production he says "In British Columbia the TV studios are full but most of the series being made here are American shows."
For the past year Ferns has toiled on his latest production Listening To Orcas premiering on CBC-YV's The Nature Of Things Friday February 21 at 9 p.m.
"It's about the toughest assignment I've had. There is a separate French version and another German one. I somehow feel Michael's English language version the best --they all wanted different angles to the same story."
Michael Allder directed it beautifully and the co-writer is Gail Gallant and Geoff Matheson edited it very tightly.
There are so many memorable scenes.
We see the narrow habitat of the orcas off Vancouver island which is threatened with noise pollution as well as the scarcity of salmon stocks.
We get to know neurologist Lori Marino and zoologist John Ford who are rushing to save the habitat of the orcas who are decreasing .
Sarika Cullis-Suzuki is once again our host and she covers all the basis. The use of drones to track the migration of the orcas provides a novel visual.
I think we come to care about these enigmatic animals particularly the lot of one born here in 1969 but shut up in a mainland  aquarium for 50 years.
In retirement should she be taken back to her home?
We see the shots of her reacting to her baby and not knowing how to feed it --that is the saddest moment.
Ferns says he may be finished with productions but wants to mentor students on how to survive in a cut throat business and all the while produce splendid Canadian TV shows and specials.
"After all I've been doing this for a very long time."
LISTENING TO ORCAS PREMIERES ON CBC-TV'S THE NATURE OF THINGS FRIDAY FEBRUARY 21 AT 9 P.M.
MY RATING: ****.

Posted by james bawden at 8:42 PM No comments:

A New Suzuki Shines On The Nature Of Things 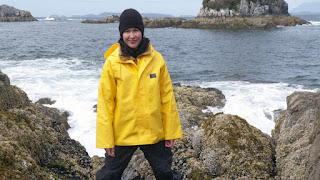 Here's where I admit my age as I remember the time not too long ago when two fine CBC-TV series were battling for ascendancy. In one corner there was the great This Land and in the other long running Nature Of Things.
And as NOT's executive producer Jim Murray explained to me with upcoming budget cuts only one could survive.
"So I've decided to personalize the series with David Suzuki as host and he'll bring in his followers every week."
This Land elected to stay host-less and was the one CBC-TV eventually dropped because of slightly weaker ratings.
And then only a few years ago the new CBC programming chief told me he intended to drop TNOT on its 50th year on CBC-TV.
I broke the story in The Toronto Star,  all hell broke loose and The Nature Of Things still survives and the programmer in question is long gone.
All of which serves as a reminder that the more things change the more they remain the same.
Now I'm promoting the latest Nature Of Things hour and welcoming a new face to the perennial favourite.
She's Sarika Cullis-Suzuki and, yes, she's the daughter of guess what world famous environmentalist turned CBC-TV host.
Her first hour long program Kingdom Of The Tides is pretty terrific in its own right.
"It started out with my fascination as a little girl in the summers I spent in B.C. by the ocean. Looking at the many creatures who lived at the edge of the sea or in the tides. So this was a sort of reunion for me to help better understand how these original creatures could actually adapt and thrive there."
The hour is actually two stories in one.
"We also go to the Bay of Fundy which has an entirely different set of creatures and mud flats that stretch forever. This I wasn't used to --we have to slide along the mud flats or we'll wind up getting stuck out there."
There are some great shots --like the hermit crabs who exist living in the discarded shells of other creatures.
"And the sea stars making meals of the mussels."
One theme is the fragility of these two very different but similar ecosystems, how climate change or pollution could spoil these sites irrevocably.
"We try to show how they all exist on each other. but these creatures are all masters of adaptation. They depend on each other. I felt a sense of wonder when there."
Cullis-Suzuki says she asked her father for advice in her first hosting role --she's a marine biologist by profession-- and he simply told her to be herself.
She has a fine, instinctive way of appearing before the camera and her enthusiasm for the subject really comes across.
She does give us some facts but is not at all pedantic.
And Cullis-Suzuki has already made a second TOT documentary on orca whales to run pn Feb, 2!1.
Kingdom Of The Tiide was expertly written directed by veteran  Christine Nielsen----- and photographed beautifully by Stefan Randstrom for Infield Fly Productions.
And yes, its virtually a must see.
KINGDOM OF THE TIDE PREMIERES ON THE NATURE OF THINGS FRIDAY FEBRUARY 7 AT 9 P.M.
MY RATING: ****.

Posted by james bawden at 10:15 PM No comments:


Posted by james bawden at 4:31 PM No comments: