The One Anniversary Of 9/11 Special You Must Catch 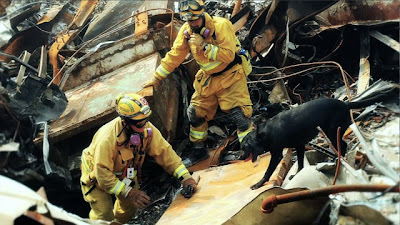 I certainly do remember 9/11.
I was working away at my desk at the Toronto Star that afternoon and went to the window to see what every one was shouting about.
I looked out at Lake Ontario and saw the sky was clogged with American jumbo jets --every U.S. flight east of the Mississippi had been ordered out of American air space --to Toronto or Montreal airports.
So I get bad vibes watching all these anniversary specials.
Until I popped in a Canadian made one that offered insights and hope --and a truly unique twist.
It's titled Hero Dogs Of 9/11 and amazingly the hourlong documentary offers a twist on that day I had never heard of --the canines that tirelessly worked the field of carnage. And some of them even perished in the line of duty.
The hour is seamless which is astounding because producer Tanya Kelen of kelencontent only started working on it in July.
I had no idea over 300 dogs were involved in search and rescue missions that day and the days after. Some were involved in search and rescue missions and doing outstanding work. Others offered solace to tired and despairing crews who were fighting against time to search the ruins for survivors.
Individual dogs get profiled including the security dog Sirius left in a basement cage in the World Trade Center as his owner walked upstairs to try and offer help.
The resulting collapse of the towers meant Sirius was a casualty --mourned by the officer to this day.
And there's the seeing eye dog , Nikki, who calmly and methodically guided her scared and blind owner owner down flights of stairs to safety, stopping occasionally to allow firemen to walk up the stairs --they would never come down alive.
We see how many dogs succumbed to the same ailments as humans and needed medical care --over 100 dogs would be treated in the next few weeks. Many had to be fitted with canine dog pads because of the smoking heat emanating from the fallen steel beams.
And we see how arduous the training is to turn a dog into an expert search and rescue dog--it takes a good 18 months.
Some are cadaver dogs trained to sniff dead bodies in rubble. Others can catch the scent of living people who need to be helped. And some are simply there as therapy dogs.
There's Nikki, the Golden Retriever, who guided the scared blind man out of the towers. And there's a marker for Sirius who also gave his life.
Producer Kelen has expertly recreated many scenes interweaving actual footage with recreations so masterfully I couldn't spot any seams. Some of it is so scarey viewers seem stuck right there in the stairwells. And she's also highlighted the true saga of one of the few humans who actually survived and might have died in the rubble had not search dogs located her. Incredibly she has gone on to have two beautiful children.
We also visit with a reunion of the search dogs and the introduction of new dogs --many of the canine heroes have passed away in the subsequent decade. Nikki died in 2004.
I came away from this wonderful hour not depressed but uplifted by its life affirming message. Hero Dogs Of 9/11 is simply stated the best 9/11 special I've seen tso far and is highly recommended.
HERO DOGS OF 9/11 PREMIERES ON ANIMAL PLANET SUND. SEPT. 11 AT 7 P.M.
MY RATING: ****.
Posted by james bawden at 12:13 AM