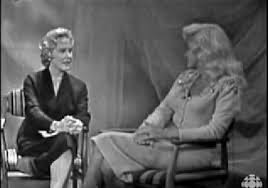 I first interviewed Canadian TV star Joyce Davidson when I was a cub reporter for The Globe And Mail in 1970.
When I walked into her suite at Toronto's Park Plaza hotel her husband David Susskind interjected "What is this? The B Squad?"
I found Davidson a warm and still splendid TVstar to interview.
I remember her laughing "I give good quotes so ask away !"
At one point I asked about her famous quote on Canadian TV that Canadians were just a little bored when Queen Elizabeth passed through on one of her tours.
"Well, it is true," she laughed. "But the papers blew that one into a big front page story. It became a learning experience for me. Best to keep my mouth shut on such matters."
"You never keep your mouth shut," interjected Susskind to intense laughter from his wife.
A few years later --it was 1972-- and Davidson had jumped to a weekly hourlong interview show up at CFTO.
She'd fly in from her New York home to interview the likes of Truman Capote and Pierre Berton.
Capote thought she'd captured him as never befopre and said it was the best interview he'd ever granted.
You let me be me," he said sadly and for once his famous mannerisms were toned down.
"Actually, I'm doing this show just to prove I'm still around," she laughed in the limousine taking her back to the Prince hotel.
Davidson had started her TV career in 1954 as the maid on a cooking show for CHCH.
"I'd clean up but had to be so pert and sassy the cook demanded  I tone down my mannerisms."
She jumped in 1956 to Tabloid CBC's early evening show loaded with interviews and talk and all live.
"I was still living in Hamilton so I'd commute back and forth every day. on the train."
"Why not ask me about the night in 1854 we said it was going to be a lovely evening and then Hurricane Hazel hit. Our weather caster Percy Saltzman came home to find his basement flooded and his wife shouting "Percy!"
Eventually Davidson had the urge to go to New York where she excelled as co-host with Dave Garoway on NBC's Today Show.
"Dave was very territorial. After all he'd started it. I did all the women's inserts from cooking to fashions. Dave banned me from ever chatting up a politician. But it was three hours live every weekday starting at 6 a.m. and that meant I had to get up at 4 a.m. I've had insomnia ever since."
Then came The Jack Benny Show "where I did all the commercials for Lux and other sponsors and I'd do a bit of banter with Jack who was such a lovely guy. Years later I met him at a party and thanked him for being so nice to this newcomer and he burst into tears."
Then I jumped to The George Gobel Show and he was less kind."
Then came stint as a rotating host of the live daily U.S. information show PM East, PM West.
"The only segment extant is my interview with Boris Karloff. The rest was shredded by the producers years later."
"When I'm at CFTO doing an hour long profile my job is to make the subject look at great as possible. I'm not there to tear anybody down. So maybe the show is a bit old fashioned.
Later on Davidson interviewed authors on CBC for Toronto's yearly Book Festival.
She lived for years in a swank apartment on Bay Street and I'd occasionally ask her out for lunch but she always declined.
"Baby, I want you to remember me as I was and not an old lady."
And what about writing a memoir.
"I'd have to tell the truth and that has always gotten me in hot water. So the answer is no."
Jpyce Davidson was 89 when she died last month, still a Canadian treasure.


Posted by james bawden at 9:50 PM No comments: