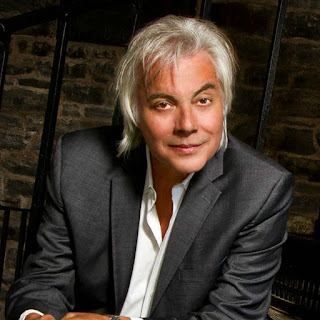 "The business wanted to kill me."
Alfie Zappacosta is trying to explain the strange up and downs of a career that included working on the Dirty Dancin' album, leads in such hits as Hair, and resurrection as a brilliant singer-songwriter.
This hour long documentary of Zappacosta's weird ride makes for riveting TV.
It answers for me what happened to the brilliant young guy who was on  target for a superstardom career before he burned out  and disappeared for what seemed like decades.
The hour long profile is accurately titled No Avoiding Cliches and during TV's summer rerun season this new production should garner a strong rating.
The premiere is on CBC-TV's Documentary Channel Sunday August 12 at 8 p.
Director Stephanie Volk and producer Braden Rorke have done  outstanding jobs of ferreting out obscure musical sets Alfie made almost four decades.
Stitching all this material together into a seamless whole is quite an achievement.
And Alfie is hardest on himself --he pulls no punches on his mistakes and accepts responsibility for everything.
He came from a very tight and loving Italian family and these roots are still apparent in the way he and his two kids interact with each other.
But with his dazzling good looks and clear bell of a voice he got pushed into an evolving super star status that he loathed from the start.
Staring straight into the camera he talks of the way coke fueled the entire music business in the seventies and eighties.
He also suffered from excruciating bouts of stage fright,. He was playing a character created by the music industry giants who saw him as a great cash generating source if he played the game "the right way".
But success as a music star wasn't what Alfie wanted. I remember a friend seeing him in Hair and saying how dominant he was but Alfie hated the routine even though it generated terrific profits.
Then he did something very unusual --he moved his young family from Toronto to Edmonton and pushed back, determined to reinvent himself.
It was a bold gamble that ultimately worked big time. He was able to write songs from the heart.
For long periods he was inactive, trying to jump start a new career  and defy the preconceptions of what the music industry wanted him to be.
The surprise in thje recently filmed concert scenes is how handsome he remains aged 65 with his blaze of stark white hair and how he still has the clear voice of a very young man.
One of his friends accurately says it's not really a reinvention but a maturation and it's about being timeless and not timely.
Of course he's recorded a new album and taped a convert video which go on sale on August 12. And it seems to me he's now singing jazz instead of rock and roll.
You can order a copy on http://zappacopsta.ca or at BlueFrogLive.ca.
This well constructed hour includes candid interviews with his two children and the music industry producers who have seen him mature as both a performer and a very loving father.
No Avoiding Cliches is pretty terrific --it leaves one wanting more.
NO AVOIDING CLICHES PREMIERES ON CBC DOCUMENTARY CHANNEL SUNDAY AUGUST 12 AT  8 P.M.
MY RATING: ****.
Posted by james bawden at 11:32 PM No comments:

A great pal of mine, Dorothy Malone, finally gets her due with a 24-hour salute on Turner Classic Movies Friday.
Guess I'll have to stay home for that one.
Malone died in January of this year at the great age of 94 and she never quite got her due as an actress despite garnering a supporting Oscar for Written On The Wind in 1957.
"I didn't have an outlandish life style" she told me the first time we met. "Deep down I'm very shy and proper. I simply wanted to do the best job I could and get home early enough to tuck my two daughters into bed."
I first met Malone on a sweltering day in Century City in 1977 --I was then attending the Television Critics Association junket and had a rare afternoon off.
It was arranged that I'd slip out the back door of the Century Plaza hotel, cross the pedestrian bridge and enter the Twentieth Century-Fox backlot by the back door and proceed to the commissary for a very quick lunch with Malone then shooting a TV movie titled Murder In Peyton Place.
But Malone's assistant intercepted me and said to proceed to her dressing room where tea and cookies would be available.
Malone explained the change this way :"Our wonderful director Robert Hartford-Davis said goodbye Friday night to the cast and we never saw him again.
"He died of a heart attack at his home Saturday night and Bruce Kessler was immediately hired as substitute.
"Bruce is busy today viewing completed rushed and will pick up everything tomorrow so we can talk as long as you're prepared to listen."
I remember asking Malone why she was such a little known big star?
"I think it's because I don't take the business seriously. But I take my work most seriously."
She was born in Texas in 1924 "but I did high school in Seattle. Texas remains my roots --I'd do a western every year if I had that oppotunity."
She started out, aged 19, as an RKO starlet in such masterpieces as Gildersleeve On Broadway and The Falcon And The Co-Eds.
"If you blink you'll miss me. I guess I had a line or three."
It was her short, sexy appearance as a book clerk in The Big Sleep (1946) opposite Humphrey Bogart that really got her career going.
"It was shot right after To Have And Have Not, the end of 1944. And our director Howard Hawks was such a stickler he was still reshooting scenes two years later including my bit --he wanted me to literally take my hair down as I close the store and look knowingly at Bogey."
Malone then settled into a rut as a Warners starlet in such stuff  as Janie Gets Married (1946), Two Guys From Texas (1048) and Flaxy Martin (`949).
"I completed that one and Jack Warner dropped me saying contract players were too expensive."
"I went home to Texas determined to learn the insurance business. Then Randy Scott located me and offered the female lead in his latest oater The Nevadan. I thrived in westerns. I did Saddle Legion (1951) which was a real B with Tim Holt. I did Jack Slade (1951) with Mark Stevens. I did The Lone Gun (1954) with George Montgomery.
"I also went back to WB as Doris Day's older sister in Young At Heart (1954). Jack Warner came on set and didn't remember he'd once fired he. I was the oldest sister on the screen but youngest in real time which seemed to irritate Doris when I mentioned it."
In 1956 Malone won her Oscar for Wrrtten On The Wind "because I did things I normally would be uncomfortable doing but Douglas Sirk was a great woman's director. He quickly reunited Rock Hudson ,Bob Stack and yours truly in Tarnished Angel;s which I feel a better movie all around,."
But winning an Oscar?
"It was a bummer. My price went up and parts I wanted to play were now out of reach."
In 1965 Malone starred in Pthe TV soaper Peyton Place --she made 430 of the 514 episodes, eventually complaining her part was diminished as the parts of Ryan O'Neal and Mia Farrow grew.
"This hit could have gone on forever. But it started as two half hours a week. ABC got greedy and demanded a third hour. Meaning audiences would have to slot three separate days to watch us and the ratings just died.
"But I have no regrets. I'm here aren't I --back as Constance Mackenzue."
I later had grand reunions with Malone in Toronto when she guested on the daily TV soap  High Hopes (1978) and later on Littlest Hobo (1980).
I just think Malone would be proud to  be honored by TCM. It's a case of better late than never.

Posted by james bawden at 4:50 PM No comments:

I don't wrote much in the summer because TV is all reruns these days.
But one full day of reruns is something I'm looking forward to --Monday on Turner Classic Movies it's Audrey Totter day.
There will now be a moment's silence for you to ask "Who the heck is Audrey Totter?"
I first met the great Totter on the set of her MGM series Medical Center in 1974 and we set a day for lunch the next week --I was in Los Angeles at the TV Crirtics' Convention.
I'd been fascinated by Totter's acting skills ever since I'd watched the 1046 MGM classic Lady In The Lake on Elwy Yost'\s TVOntario show.
"I got the part because I was from radio and in this one I had to look straight at the camera for most of the movie. The camera stood in for our leading man Bob Montgomery and it was called the subjective manner. Bob was behind the camera and added the dialogue but we saw everything through his eyes."
Totter was so busy maki g LITL that when Universal offered to borrow her for The Killers opposite Burt Lancaster "MGM said I was too busy and sent over Ava Gardner instead and that part made her a super star."
Lady In The Lake is on at midnight but at 1:30 there's Any Number Can Play (1949) with Totter vo-starring with Alexis Smith and Clark Gable.
"We had a hot romance for a bit but I could see he still loved his dead wife--Carole Lombard. :
At 6:30 there's Totter's master piece The Set Up (1949) opposite Robert Ryan.
"It's considered the best ever boxing film and was made in real time. But it came out after another boxing sagas called Champion and bombed at the box office."
At 6:30 there's High Wall (1948) with Totter a psychiatrist trying to solve Robert Taylor as a psychotic war veteran.
"We filmed late one night --no supper --and all the restros were closed by the time we finished. So Bob drove me to his home and hollered for his wife (Barbara Stanwyck) to get out of bed and fix us some bacon and scrambled eggs. "
Totter's favorite film The Unsuspected (1947) comes on at 1 a.m. --and stars Claude Rains as a murderous radio star and Totter as his lascivious niece.
"Claude was 5 feet two inches and I towered over him so the next day he comes in wearing shoes with lifts and I still towered over him."
Totter was making Medical Center when MGM's That's Entertainment was released in 1974 amd she was invited to the premiere although she never made musicals.
"At the reception Ava Gardner ran up to me and said 'You have everything I ever wanted --a husband and a child.' And she's right --try sleeping with a career."
The last time I visited with her she was at the Motion Picture home battling old age and boasting "I had one husband and my family came first. But I still made half a dozen greatish pictures."
Audrey Totter died in 2013 aged 95 but I think she'd be tickled pink TCM has finally saluted her.