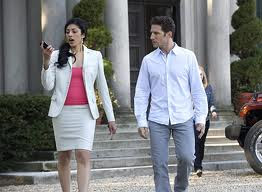 A funny thing about Showcase. The Canadian cable network was originally structured by Atlantis Films and CBC as a repeat channel for superior Canadian drama series.
Only there are few if any Canadian drama series left on Canadian TV these days.
CBC sold off its percentage years ago and these days Showcase isn't dotted with Canadian repeats but with the cream of American cable TV dramas.
Like Royal Pains which debuts Wednesday on Canadian TV although Showcase is picking it up from its second season.
Starring is a familiar U.S. TV face --Mark Feuerstein who graced such TV sitcom bombs in his younger years as Fired Up (1997), Corad Bloom (1998) and 3 Lbs. (2007) causing him to be dubbed "Murderer Of A Thousand TV Sitcoms)" by one disgruntled TV critic. But it wasn't his fault, he was always better than his material.
In fact Feuerstein is very gifted --look how he effortless stole his scenes in movies' What Women Want (as Morgan Farwell) and TV's West Wing (Clifford Calleyt).
Here in Royal Pains he's effortlessly cast as youngish ER surgeon Hank Lawson who saves a street urchin's life while the hospital's billionaire philanthropist dies. Fired, he winds up watching TV all day and living in a catatonic state until his younger go-getter brother intervenes and takes him to the swank Hamptons to recuperate.
Lawson winds up at a Memorial Day party run by reclusive billionaire Boris Kuester Von Jurgens-Ratenicz ( (Campbell Scott) and he even saves the life of one guest, a lush supermodel, and so gains instant fame in this the wealthiest society in the U.S.
His brash brother Evan is well played by Brampton's Paulo Costanzo and the brothers have a close relationship that reminds me of the banter in the series Number$ --remember that one.
The bros live in some luxury when Lawson is set up as a concierge doctor catering to the ills of the rich and famous. Many of the cases could hardly happen back in New York City.
In the first new episode Lawson rushes to one mansion to save a young man trying to tear down his famous father's inner sanctum where daddy became progressively more paranoid.
In the second episode he's trying to save a young heiress whose increasingly severe fainting spells might indicate congestive heart failure. Lawson diagnosis says it's something else.
Helping Lawson along the way is his gorgeous personal assistant Divya Katdare ( played by Reshma Shetty and an on-off love intertest with the director of the local hospital , Jill Casey, played fetchingly by Jill Flint.
Still only 40, Feuerstein sports charismatic qualities as Lawson --people just assume he's a super talented doctor.
And the bfrothers play out their own personal saga as their long lost father (Henrey Winkler) shows up to disrupt their lives.
Shot in and around the Hamptons, the show has a different look to it than the bavklt productions of L.A.
And this merry mixture of family angst, ripe comedy scenes and love seeking really does work, so much so that the first season of Royal Pains ranked among the highest of U.S. TV cable shows.
ROYAL PAINS PREMIERES ON SHOWCASE WED. AIG. 31 AT 10 PM.
MY RATING: *** 1/2.

Hello! I've been reading your blog for a while now and finally got the courage to go ahead and give you a shout out from Kingwood Texas! Just wanted to mention keep up the great work!
Look into my website ; mistress cams