A Farewell To All My Children 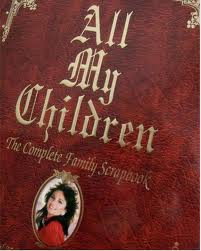 Here's the truly big news of the week.
Forget those terrible new prime time TV series currently spewing forth. Most will be toast by season's end.
The biggest TV story out there is the demise of All My Children Friday on ABC.
Did it have to happen? No way. ABC is killing off one of the staples of daytime TV to make way for cheap lifestyle programming.
Take a look at how CBC has been putting new life into its evergreen British import Coronation Street.
CBC runs a new episode every weeknight (except Friday) at 7:30 to jump start its prime time programming. And that same episode is on late nights and at 2 p.m.
Then the four episodes are packaged for Sunday mornings as Sunday brunch with Coronation Street and different audiences watch every time.
ABC could be doing the same thing --re-building the audience base eroded by the multiplicity of choices. Instead the network has sold off the rights and a new version will debut in January on the internet although key cast members will be missing.
What happened to daytime soaps?
Well, first of all more and more women are working these days so the base of traditional support is no longer there.
I remember taking tea once with Agnes Nixon in her New York hotel suite and she was one of those who energized the genre by creating Another World and then One Life To Live.
Soap companies including Procter And Gamble owned the original TV shows outright.
When ratings started to topple these were the vulnerable soaps --CBS has kept on the air soaps it owned outright.
ABC had a controlling interest in the U.S. cable network SOAPnet but has divested itself of that cable web. Thus it no longer needs All My Children.
in the 1950s I'd watch two soaps every afternoon before heading back to school: Search For Tomorrow at 12:30 and The Guiding Light at 1 p.m.
Both were live and each ran 15 minutes (including the commercials which were filmed).
The day I spent with Nixon she explained the fight to get All My Children up and running. It debuted Jan 5 1970--originally Nixon and husband Bob owned it outright but sold all rights to ABC in 1975.
When I visited the set in 1974 it was taped at ABC Television studios at 101 West 67th Street which is now a 50-story apartment complex.
Nixon told me that day the audience was over 30 per cent male and it also attracted a huge audience of college kids.
Lunch on set with grande dame Ruth Warrick was fun especially when she said "I started out in Citizen Kane, the greatest film ever made, and now I'm in a soap. I see no diminution of my status. In fact I've got a lot more fans these days."
The final episode was taped in L.A. on August 11. Its not known when the first Internet episode will run.
But one thing is clear: a phenomenon of American culture has departed from TV forever.
Posted by james bawden at 4:27 PM