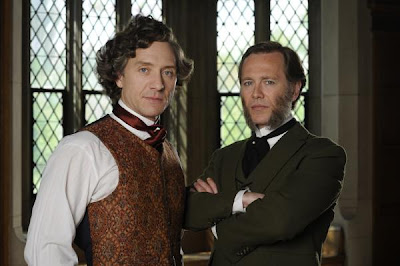 People have been asking me when the Canadian TV season starts.
They're not thinking of those well made series shot in Canada but set in some unknown place --the ones that are made to sell to American TV networks.
They're thinking of Canadian Canadian shows.
Well, Monday night at 8 on CBC-TV comes a two-hour drama that's as relentlessly Canadian as maple sugar.
The title says it all: John A: The Birth Of A Country.
And the cast reads like a who's who of Canadian TV stars.
Shawn Doyle (The Eleventh Hour) plays John A. Macdonald back when the future prime minister was just another member of a faltering Canadian coalition. Canada in those days comprised an uneasy union of Upper and Lower Canada.
Set against him there's another future Father of Confederation: Peter Outerbridge (ReGenesis) as George Brown, editor of the Toronto Globe.
Aidan Devine (The City) plays another Macdonald, John Sanfield Macdonald, erstwhile leader of the Liberal party and the future first premier of Ontario.
Also there's David La Hayne (George Etienne Cartier), Jean-Michel Le Gal (Antoine-Aime Dorion).
Veteran producer Bernard Zuckerman (This Is Wonderland) made it and veteran Jerry Ciccoritti (Death And Life Of Nancy Eaton) directed it with some class.
The meaty script is by Bruce M. Smith from Richard Gwyn's recent Macdonald biography.
As a former history student at University of Toronto I wish there was more insights from the biographies of Macdonald and Brown by Donald Creighton and Maurice Careless.
The saga opens in 1861 with the union of Upper and Lower Canada going nowhere fast. Governments fall regularly because of the animosity between English and French.
A lot of the story is personal --comprising dual biographies of Macdonald and Brown, ironically both Scotsmen but fiercely loyal to the British crown.
As the American Civil War heats up there's deep concern President Lincoln will one day turn his armies --numbering over a million men --northward and consider Canada easy pickings.
We see Macdonald as first a political opportunist saddled with an ailing wife addicted to opium for her pain.
And Brown is so violently anti-French he cannot cobble together a majority because he has no seats in Quebec.
Now making a drama set in 1861 to 1864 in today's Toronto is a real challenge --there are so few authentic buildings left.
But the on-location photography takes us to University College and Osgoode Hall for some exteriors. Production designer Tim Bider and Costume designer Mary Partridge-Raynor have created alchemy in recreating those Victorian times.
I'm not sure Doyle is quite right as John A. --he's too serene. I think the real Macdonald was more charismatic , mercurial, and certainly a heavy drinker.
Outerbridge complete with thick Scottish accent has the juicier part and with his whiskers in place shows how passionate and volatile Brown could be in his love of the emerging nation of Canada.
Much of the "action" centers on the historic debates between the two antagonists and to me these moments seemed exciting helped by Ciccoritti's directorial touches and the fluid camera work of Michael Story.
At one time CBC was all into dramatizing Canada's past.
I remember being on the set of CBC's big 1978 hit The National Dream. And I was on the set of a companion 1979 mini-series Riel.
And later there were dramatic recreations of the lives of Laurier, Rene Levesque, Tommy Douglas with diminishing returns.
I'm hoping there is still a place to tell uniquely Canadian stories on CBC.
If that is so the future of the public network is justified.
JOHN A. PREMIERES ON CBC-TV MON. SEPT. 19 AT 8 P.M.
MY RATING: *** 1/2.
Posted by james bawden at 10:13 PM