Sheen Really Missed On The Revamped Two And A Half Men 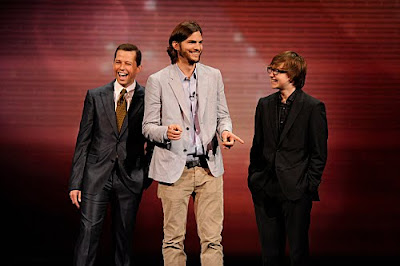 So there I was talking to a Grade Six class about the new TV season.
And I didn't get a single question about the new shows which is par for the course'
No one but TV critics have seen them yet.
The talk was all about Charlie Sheen's departure from Two And A Half Men and whether he could be replaced.
And having just finished watching the first new episode on CBS and CTV the answer is simply: No.
Sheen was 90 per cent of the show. We watched because this guy was really dangerous.
He wasn't playing a character. He was being himself and it worked for an awfully long time.
The show was already losing steam, it was repeating old plots, the kid was growing up but CBS was hoping to get a few more seasons out of it before the inevitable departure to Rerun Valley.
Then Sheen sort of blew up and started acting very strange and got fired.
And there he was on the Emmys the other night looking rather subdued and just a little diminished.
That's also my verdict on the sitcom CBS is trying to resuscitate. Diminished
CBS made every mistake in the book in the first new episode.
When stars depart series in a huff the thing is they must be quickly killed off and never mentioned again.
CBS did it right when McLean Stevenson was unceremoniously dumped from M*A*S*H --his character got killed off and the show continued with a better actor as replacement (Harry Morgan).
When Valerie Harper refused to return to the sitcom named after her the character was killed off and she was quickly replaced by Sandy Duncan and nobody really minded.
But on Two And A Half Men the episode opened with Charlie's coffin as if CBS could not resist one more dig at the guy.
Then a steady stream of gal pals reminisced about the baddie.
"He gave me herpes!" gushed one former lover.
"...vaginal warts..."said another.
"He used my panties to make tea..."
"He loved to be spanked..."
Already viewers were missing the guy. In a bad way of course.
Then came the only good moments of the half hour.
The beach house had to be sold so in walked one potential buyer --played by John Stamos. Did you know he was first choice to replace Sheen and turned CBS down because it was a losing proposition.
Then came the co-stars from Dharma And Greg:Jenna Elfman and Thomas Gibson.
Another cute touch.
Then replacement Ashton Kutcher sauntered in and this sitcom sank like a stone.
He played a would-be suicide who's a billionaire and he buys the property complete with the two occupants. Sure he was nude (to the studio audience) but the zingers suddenly stopped.
This became an aging sitcom in desperate need of life support.
Here's how CBS should have handled Sheen's departure.
1. Repackage the show with the two remaining regulars going off and meeting up with Kutcher in a completely different environment. No mentioning of Sheen after the initial credits.
2. Re-title the show and shop it to the public as a spinoff. As in Frasier which ran forever with Kelsey Grammer in a new situation.
3. then CBS would have a hit and not a re-warmed show where we'll fiorever be wauting for Sheen to return in someway or other.
Stuck against FOX's House and the second half of ABC's Dancing With The Stars and this old show doesn't seem to have much of a chance.
Sure, ratings will be big the first week out. But don't forget House doesn't return until Oct. 3.
And just as important there's going to be no ratings flow into Molly & Me which starts its sophomore season Sept. 26.
Posted by james bawden at 10:41 PM

1. I thought Alan should have become the lead bad boy versus a naive Kutcher. As his character moved towards during last season. Instead it switched at mid-episode point into a kick-me show.
2. I missed seeing the puppet dummy at the funeral.
3. Laverne and/or Shirley checking out this particular L.A. house would have been funny. At least for the geezer crowd.