Leno: Not Quite Ready For Prime Time? 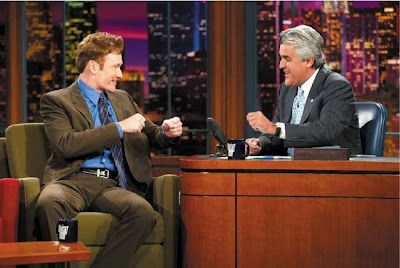 Is Jay Leno really changing the face of American prime time TV as some of the pundits south of the border are claiming?
The premiere of his new prime time talk show is on NBC and citytv Monday at 10 p.m.
The time change is a mere 90 minutes.
Oh, give me a break. He's not the first late night stand up who aspired to make it earlier in the evening.
I actually remember as a kid debating whether to watch Steve Allen on NBC or Ed Sulliovan on CB when Allen migrated to his Sunday evening timeslot in 1956.
Allen had tired of the late night slot and wanted to do his thing once a week and he spent three years battling it out with old pro Sullivan who akways had the better guests. Finally, in frustration NBC put him on a half hour earlier at 7:30 insteade of 8 and still he was number second.
In fact Allen got Elvis Presley on TV before Ed but Sullivan soon had the rocker contractually all tied up.
In 1958 Allen moved to Hollywood and a Monday night slot and later ABC picked him up. But he just couldn't last in prime time despite an able band of stooges. Remember Louis Nye, Pat Harrington Jr., Don Knotts, Tom Poston, Bill Dana?
Next up was Jack Paar who'd been Tonight Show host for five years (1957-62) and again it was NBC that promoted him to prime time.
I've just been watching (on DVD) some of these hours which ran for three seasons (1962-65) and the guests were very good: Bette Davis, Judy Garland, Richard Nixon. But still he faltered.
And so will Leno.
NBC is trying this gimmick because the once peacock proud web has recently fronted such stinkers as Bionic Woman and Knight Rider remakes as scripted dramas.
Putting Leno on is 90 per cent cheaper and on many nights he masy score with the right guests. How Leno's move this will affect Tonight with Conan O'Brien remains to be seen. Leno can grab the good guests and the audience will be bigger.
Remember it was NBC that replaced Leno with Conan to attract a bigger audience (so far Conan trails Letterman).
Bill Carter in The New York Times says Leno has never gotten industry respect which is true. The guy he displaced, Johnny Carson, later made appearances with David Letterman but never with Leno.
NBC gave Leno the weeknights at 10 slot to prevent him from jumping to another network. Up against ratings hits like CSI or The Mentalist he'll surely falter.
On other nights when reruns are in bloom he may do very nicely thank you very much.
But he comes cheap --the most important thing for faltering NBC.
I'm not going to rain on Leno's Parade. I respect the guy who is a confirmed workaholic. I'll keep watching him no matter what.
But remember NBC is saying even if Leno gets a 1 rating that will be a victory of sorts.
Posted by james bawden at 12:03 AM