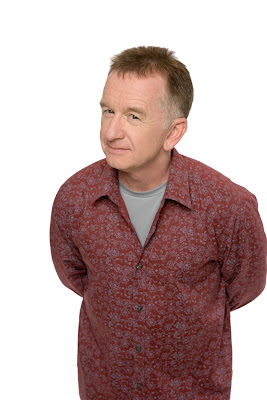 "This is going to be a big challenge," allows Ron James who is taking over CBC-TV's Friday night comedy slot long held by Royal Canadian Air Farce.
A huge challenge, sure, but not an impossible one or so CBC programmers figure. James' track record on the road and his TV specials demonstrate his huge audience base.
It took some nerve canceling one of the linch pins of Canadian content --RCAF had been on TV for over 17 years and before that was a long running staple on CBC Radio.
And ratings had held firm at over 630,000 a week with the series being refreshed in recent years with new talent.
But RCAF viewers were --gulp --older and staid and at CBC "youth" is the current buzz word needed to attract sponsors.
So enter Ron James who is best known as a stand up comic on traveling one man shows which eventually wound up as these high rated TV specials every year or so beginning with Up And Down In Shaky Town, an hysterically funny account of his years as a struggling actor in Los Angeles.
"Well, I have been in TV series before,"James quips and he's right. I distinctly remember him as Raymond in guest appearances on the Rick Mercer sitcom Made In Canada. (1998).
And there was James' own sitcom Blackfly (2001-02) as Benny "Blackfly" Broughton which to me always seemed like a Canadian take on history in the same comedy mode as F Troop.
"Not enough Canadians knew their history," is James' reason why the series only lasted 26 episodes but it did demonstrate his comedy instincts can be refashioned for TV.
And now comes The Ron James Show which will certainly be part stand up but also incorporate skits with such visiting funsters as Peter Keleghan and Linda Kash.
"I'm thinking of the old Carol Burnett Show," James says. "Guests every week who can handle that kind of comedy."
Shows will be taped before an audience at CBC's Broadcasting Centre and there'll be 10 half hours culminating in an hourlong New Year's Eve special.
"We've done some scenes and it felt really good," James reports. Of course he's been doing sketches since his years with Toronto's Second City.
No doubt about it James can reduce a live audience to stitches. It remains to be seen if he gets as much leeway on weekly TV.
In interviews the Cape Breton native has said he doesn't go for quick laughs but lets the mood build. Let's hope TV doesn't try to condense what on stage takes some time to build and grow to funny fruition.
James says the situations will be very Canadian --after all he's been touring the country for 15 years always gathering material as well as performing.
The show will even have an animated segment titled L'il Ronnie about growing up in Cape Breton.
The premiere is on Friday night Sept. 25 at 8:30 on CBC-TV.
For studio tickets contast tickets@enterthepicture.com. Got that?
Posted by james bawden at 11:47 PM