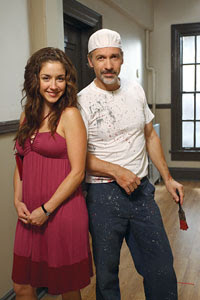 Few Canadian series make it to the sophhomore year so let's welcome back Being Erica which survived an uneven first season and might yet thrive.
When I first saw an episode last season I instantly thought of Quantum Leap because time travelling is an important theme of this dramedy. Also there's a dab of Ally McBeal from creator Jana Sinyor --a series from the female perspective is still a rarity.
Erin Karpluk (Godiva's) returns as the well named Erica Strange who gets more chances to relive old experiences and all at the hands of her mysterious therapist Dr. Tom (Michael Riley).
Ah, but the title of the first new episode is "Being Dr. Tom" meaning it's time for the good doctor to reveal parts of where he is coming from --the first year ended when he decided to simply walk away and end the relationship.
"But he's returning" cautions Riley. "And, yes, I sometimes felt frustrated the first year because we couldn't reveal much of him."
Riley, 47, knows all the ins and outs of making Canadian TV. After all I first interviewed him on the set of 1988's CBC miniseries Chasing Rainbows --he'd done a few episodes of the Edison twins and not much more.
Cast on Chasing Rainbows as one of the three bright young TV stars of tomorrow he's still around 21 years later as are his co-stars Paul Gross (Due South) and Julie Stewart (Cold Squad).
Riley graduated to off film projects for awhile (like Mustard Bath) and character parts in such TV flicks as Butterbox Babies (1995).
But he was back in the TV series groove for 25 episodes as fast talking Brett Parker in Power Play (1998-2000), a series that was vastly popular but got cancelled after two seasons.
"I saw the end coming despite denials --the second season finale was titled What It All Meant."
The semi-superb legal series This Is Wonderland followed (2004-06) and as Elliot Sacks he once again was completely different, actually often brilliant.
In 2007 two TV projects came out almost simultaneously --as the increasingly distraught astronaut in Race To Mars (2007) as Rick Erwin and stealing all his scenes in CBC's miniseries St. Urbain's Horseman (2007) as creepy, grubby Harry Stein. "At home I still have the false teeth I had to put in every day."
Look, this actor thrives on homework, likes to pin up the script pages all over his dressing room to contemplate the story flow. And this was difficult the first season because he didn't have that much backup material.
Signed first, Riley says he tested with several actresses up for the lead. "Only Erin had the goods, and she's still getting stronger. It's quite a stretch for a young actress, she has to work all day every day."
Because of CBC budget restraints Being Erica is down by one episode this season --to 12. However CBC audience research indicates the series starched strongly with young women Erica's age, the very audience sponsors hope to reach these days.
Riley has been in enough "hit" series that didn't last as long as they might not to venture a guess about Being Erica's longevity.
"But I feel stories are consistently getting stronger. We all know our characters that much more."
The season premiere is on CBC Tuesday September 22 at 8 p.m.
Posted by james bawden at 12:37 AM