Larry Gelbart Laughed All the Way To the Bank 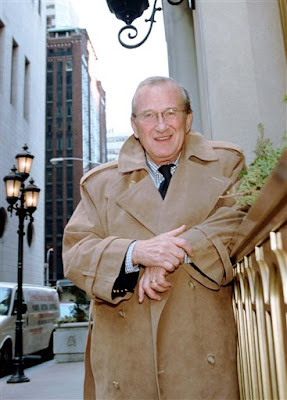 Believe me when I tell you TV is a writer's medium.
Not an actor's medium. And certainly not a director's medium.
And how do I know all this? Because Larry Gelbart told me so one day on the set of his series AfterMASH and I still believe him.
Gelbart died the other day at 81 still in a creative frenzy. He was readying a script about the Bush Administration called SH** Happens. And a movie musical version of his Broadway hit City Of Angels to star Bruce Willis.
I only met him that once on a hot summer's day in 1983 at 20th Century Fox Studios on the set of AfterMASH when he wandered by as I was interviewing old pal Harry Morgan.
Gelbart stopped, listened in a bit, and then took over the interview by sheer force of comedy timing.
I thought he'd started his marvellous career as a writer on Sid Caear's Show Of Shows in 1950 but he vigorously shook his head.
"Double no! I started as a writer on the radio hit Duffy's Tavern. Then I wrote for Jack Benny. then TV came along. And it was Caesar's Hour in 1954."
Years later I watched him on a panel with other surviving Caesar writers including Mel Brooks but not Woody Allen. All were funny yet Gelbart was the standout. He just thought funny, that's it.
He wrote the fabulous Broadway musical A Funny thing Happened On His Way To the Forum (he thanked Plautus for the inspiration) and later rewrote Volpone as the Jackie Gleason hit Sly Fox.
In 1972 he was called upon to write the TV version of M*A*S*H and stayed around for 97 episodes.
Screen credits included The Notorious Landlady (1962), Oh God ! (1977) movie, Movie (1979) and Tootsie (1982) which he co-wrote.
Two of my favorite Gelbart quotes: "If Adolf Hitler is alive I hope he's out of town with a musical."
And: "The experience of Tootsie taught me never to work with an Oscar winner who is smaller than the statue."
The day we talkled he was already convinced AfterMASH would flop because viewers would be waiting to see Hawkeye (Alan Alda) enter and he never would.. Gelbart was dead right --the series was cancelled by CBS after four months.
I'm missing that Gelbart wit already.
Posted by james bawden at 11:56 PM