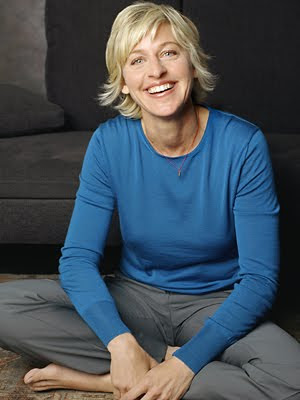 On CNN they even interrupted Anderson Cooper reporting live from Afghanistan to tell him the news Ellen DeGeneres was the new judge on American Idol. He thought that was so cool and so do I.
There's nothing like keeping a nation's priorities straight.
President Obama had just finished addressing the U.S. Congress about health care only to be interrupted by a Republican shouting "Lie!"
But that would have to wait for meatier fare: the idolization of Ellen.
Curious but just a few years back she'd been a TV pariah on her Disney originated sitcom titled --at first anyway --These Friends Of Mine.
I was there in 1994 as Ellen was rolled out to tepid public response.
DeGeneres was but one of a gaggle of stand ups trying to benefit from the Seinfeld craze.
Remember Jackie Mason in Chicken Soup. I'm trying to forget that one but I just can't.
What drove fans insane was the Disney dance around the topic is she or isn't she? A lesbian, I mean.
In 1994 that seemed the burning question of the day. But when the season returned it had a name change (to Ellen) and some key characters were dumped. Also, Ellen was no longer interested in nabbing the perfect man but Disney would not as yet let her run after the perfect woman.
I remember interviewing co-star Ayre Gross around this time and he voiced his own confusions about where this sitcom was heading.
Then in 1997 Ellen fell for her boyfriend's producer Susan (Laura Dern). Ratings plummeted. Everybody seemed down on Ellen except her TV therapist played by none other than Oprah Winfrey.
As the credits rolled on the final episode we heard the jaunty refrain "Who's got a lesbian smile? Ellen!"
But now she has rehabilitated herself on her daytime talk show. She's bright, she's funny, she's open, she dances great. Even does cosmetics commercials. People genuinely like her for being who she is without any pretense.
This could be Ellen's time to shine --she's shown that you can succeed just by being yourself.
Posted by james bawden at 2:38 AM