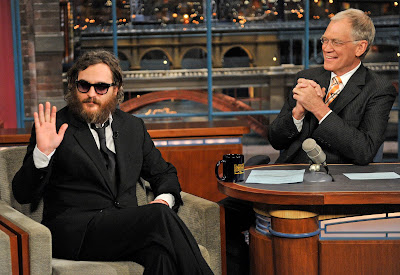 The most important event in David Letterman's TV history happened off camera.
It came in 1992 when NBC informed Letterman that he would not be replacing Johnny Carson after years as Carson's heir apparent.
Remember that Carson's company had been producing Letterman's Late Show on NBC since 1982. Remember also that Carson appeared on several episodes of Letterman's subsequent CBS late nighter --but never deigned to go near Jay Leno and the Tonight Show.
In fact Letterman became so bitter about the incident that he still occasionally talks about it.
And he got great malicious glee over Leno's predicament of trying to replace Conan O'Brien after Conan walked out in a bitter NBC contract dispute.
Letterman is like that.
Right now he's been celebrating his 30th year as a late night talk icon. But his current CBS gig is very much different from his NBC show.
Not that he's ever been warm and cuddly.
And despite all the bad publicity Leno received during the Conan stink Leno consistently out rates Letterman to this day.
A lot of guests won't go back on his show --like Shirley MacLaine who blasted him on air and never again appeared on the couch.
But the way I'm figuring it departing NBC and not getting the Tonight Show was the best thing to ever happen to Letterman.
There was no way he was going to keep that huge audience Carson enjoyed.
Indeed in his later years Carson got to musing out loud that he could never have enjoyed such power in a multichannel TV universe.
But Letterman is Carson's heir --just on another network.
He's never been friendly to the press.
Indeed the only time I can think of that he appeared before the Television Critics Association came in 1993 when he jumped to CBS.
My attempts to interview him for the Toronto Star were always rebuffed. When I tried to work though sidekick Paul Shaffer I was told to forget it.
It was the same with Carson. I did meet him, But by accident.
In the late 1980s I was in the Burbank office next to his interviewing Freddie De Cordova who was Carson's long suffering director.
And Carson walks in all agitated, sees me making notes and sits down and listens for a bit. Then he jumps up, shakes my hand and departs.
"That's my Johnny," laughed Freddie.
And that's the same way with Letterman. He can be curt, even dismissive to some guests.
But most of the time he gets it very, very right.
Like his decision to keep going the tragic night if 9/11. He effortlessly switched off the comedy and invited old pro Walter Cronkite on board to muse about the essence of American independence and democracy.
And it really worked. Such a pep talk steadied a nation's nerves. Am I right in terming it Dave's finest hour?
He's about to hit 65, an age to be as curmudgeonly as possible rather than the hipster who dazzled us on NBC.
Funny thing about that NBC show: all the regulars he used so wisely and well like actress Teri and Larry "Bud" Melman were dropped when he jumped to CBS. NBC insisted on exercising "intellectual property" although Melman resurfaced as Calvert DeForest --his real name. I've since heard NBC insisted it had copyright on much of the Letterman shtick --I think the term used was "intellectual property".
NBC once tried to sell all of its Letterman reruns to A&E for afternoon repeats but Letterman (now at CBS) kicked up such a stink the offer was withdrawn.
Garr reappeared in 2008 after successfully battling a brain aneurysm.
Then there was the night in 2009 when he told the world about the blackmail attempts. And what powerful TV it turned out to be.
See, he's not the same Dave we've always known. Like the rest of us he's aging. He's visibly slowing down, getting crankier, balder. But still near the top of his game --witness his recent interview with actor Michael Fassbender whose nude turns in the movie Shame gave Letterman some fascinating material to play with.
CBS sources are saying the network is trying to sign him to a new contract for at least two more years. Last year Forbes put his earning at $45 million. I just hope he won't be fading away as Carson did.
Late nights are hard enough to get through these days. It would be impossible without Dave.