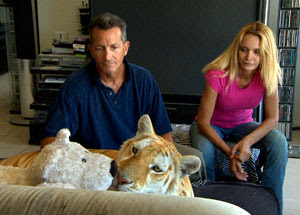 I'm told by CBC insiders that it actually happened: a few seasons back CBC senior brass seriously contemplated ending The Nature Of Things after its 50th anniversary.
CBC was then on a youth kick and had already bumped off a precious icon Royal Canadian Air Farce because its viewers were older than Little Mosque On The Prairie's --which had a lower rating. but survived because of youthful demographics.
In the case of NOT wiser heads prevailed or maybe some of those heads departed in the latest CBC management coup.
The result has been a stronger, steadier NOT and more episodes per season. It's as if CBC now recognizes the value of a Brand Name that has stood the test of time for so long.
Witness the first new NOT offering of the Second Season: The American Tiger co-directed by Francis Delfour and Sebastien Tetrault.
The hour looks at the strange status of tiger breeding programs in the U.S. where private owners and companies are still allowed to breed tigers and keep them as exotic if highly dangerous pets.
First we start with the TV news shots --a tiger escapes in a California town in 2003 causing panic and has to be shot down by a tearful police man.
And more recently a private zoo keeper in Zanesville Ohio commits suicide but not before freeing all his exotic pets.
Authorities have to shoot all the rampaging animals and the death toll includes 18 beautiful tigers.
One note: I would have loved a side glance at the situation in Canada and why it is so different here.
In the U.S. it's a question of a welter of conflicting state laws and the disinclination of federal authorities to set national standards for private breeding.
For one thing there's opposition from powerful entertainment sources as well as suppliers of the food tigers eat.
The strange state is this: wild tigers which numbered 100,000 in 1900 now number less than 4,000 and are disappearing fast.
Their habitats are being destroyed with the encroachment of humans and some of the seven species are considered virtually extinct.
But home grown American tigers are thriving as never before. Their population could be as high as 10,000 --according to various counts.
But the scientists interviewed here say these tigers can't quite cut the grade genetically. Many are hybrids of more than one species. At zoos the ancestry of each and every tiger gets scrupulously recorded.
Another thing about the domesticated brand: they haven't been taught survival skills by their mothers. Most do not know how to hunt. The idea that they could be re-released into the wild is ridiculed by the experts.
This hour covers a lot of ground and has some familiar faces. There's Hitchcock heroine Tippi Hedren who devotes herself these days to a big cat sanctuary she runs.
She'd like a complete ban on the private breeding of tigers arguing that tigers can never be pets.
Indeed the case of Siegfried and Roy is brought up --the Las Vegas act was stopped one night when a trained tiger turned and mauled Roy.
This hour passes quickly and is well edited. But it should come with this cautionary note: "No humans were injured in the filming of this documentary." Because the camera gets dangerously close on several occasions to prove the directors' points.
THE AMERICAN TIGER PREMIERES ON THE NATURE OF THINGS ON CBC-TV THURSD. FEB. 2 AT 8 P.M.
MY RATING: *** 1/2.
Posted by james bawden at 11:39 PM