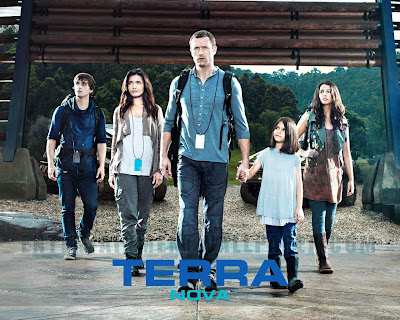 I'm already hearing whispers from my Hollywood sources all about what series will live and which will soon die.
One series already pronounced dead after eight seasons is House which Fox cancelled early despite steady ratings. The network concluded the producers had simply ran out of ideas and I agree --it had become prohibitively expensive to make.
House's departure could mean the resuscitation of Terra Nova for another 13 episodes, I'm told.
More recent shows seemingly doomed include the awful Are You There, Chelsea? which has picayune ratings and the worst reviews of the season.
I was surprised ABC's Cougar Town is still in contention until I realized ABC owns the show and needs more episodes to make it viable in syndication.
ABC sources are saying the Dana Delaney drama Body Of Proof will "probably" get the boot --sinking ratings are one reason and ABC seems to favor Revenge as a second seasoner.
I figured PAN AM had already got the boot but ABC continues to look at this one with hope. Ratings never jelled after a massive campaign of over sell but neither have the numbers tanked. It might hang around if ABC can't find something stronger.
Fox is said to be down on Fringe because of high production costs but it is produced by J.J. Abrams who is revered for his Lost success. I think the Friday night slot is wrong and urge a reboot.
Fox is not likely to renew I Hate My Teenage Daughter which got terrible reviews and a teeny ratings.
CBS continues to tinker away on Unforgettable --it isn't keeping enough of its NCIS:LA lead-in and needs some help --Jane Curtin was recently added to the cast and this may help it gain a renewal slip. Or how about better written episodes?
CBS has three CSI franchises all rapidly aging and one or two of them might be axed. Most vulnerable is CSI:Miami which wilted when moved to Sunday nights. All three series are slipping fast in the same fashion as Law & Order.
Similarly NBC might renew Parenthood just because the fourth network has nothing else half as dependable in the closet.
The Firm has already been cancelled NBC sources are saying unofficially but 22 episodes were ordered and have to be run off in this Canadian co-production.
NBC will also renew Grimm even though it has an unexpected hit in Smash. Critical response was huge but NBC need to try it in a better time slot.
It's the same with Harry's Law which got re-tinkered after the first season and lost its juice and chunks of the audience. NBC needs it as backup I'm guessing.
A big upset would come if NBC killed off 30 Rock. The reasons: ratings are way down and it's very costly to make and why not go out in high style?
30 Rock's powerful executive producer is Lorne Michaels who also controls Up All Night. I'm thinking at least one of these shows will be back and maybe both will givens Michaels' clout..
I hate Whitney, viewers hate Whitney but NBC thinks Whitney Cummings can still shine in this stinker. There's no decision on its fate.
I'm told other new series including Subpurgatory, Person Of Interest and 2 Broke Girls will definitely be back although they haven't received renewals as yet.
Of course all this could change when the next batch of overnight ratings appear. Stay tuned.
Posted by james bawden at 12:33 AM