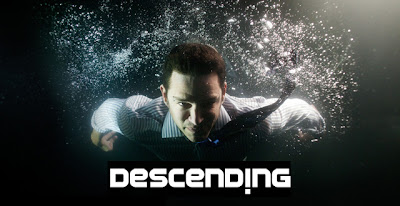 One of Canadian TV's biggest hits in recent years was Departures which ran three seasons on OLN garnering big audiences as well as international awards.
Building on that stature Hamilton-based filmmakers Scott Wilson and Andre Dupuis have now turned to another facet of world exploration: the ocean depths. Catch the first episode Sunday night at 9 on OLN.
In the new travel series Descending the twosome have made a hauntingly beautiful series of hours about their dives around the world.
The first episode is a must-see experience as it carefully builds up audience anticipation of what to expect.
First we're introduced to cast and crew: boyish adventurer Wilson we already know about but this time as he explains he is confronted with a whole lot of new challenges.
Underwater photography is a challenge in itself --we see the guys trying out their equipment in a deep community pool. The lights have to be tested and there's some getting used to the glare which in real situations (like murky waters) probably won't seem as intense.
State-of-art technology allows new microphones set right in the helmet so the team can readily communicate with each other.
In the first episode the crew travels to New Zealand to join up with veteran Kiwi co-host Ellis Emmett (from OLN's Don't Forget Your Passport) who takes them to some familiar and some totally new locations for dives off the NZ islands.
We learn only one per cent of the ocean has ever been explored this way and all the dangers that threaten the oceans in this era of mass pollution. The hour was designed to carefully introduce us to this New World, satisfy our curiosity but not completely over whelm us with facts.
We get to know prankster Emmett and see the fantastic house he lives in in the middle of nowhere. The coasts of NZ seem like magical places and once the cameras get down there the amazing images speak for themselves:there are sightless eels, dozens of species of fish most people have never seen, black coral which is actually white, in short the last unexplored world left on planet earth.
By humanizing the journey and showing off the quirks of crew members and letting us see what makes them tick Descending gradually becomes compulsively viewable.
Technical aspects are spectacular with cinematographer Dupuis surely up for many awards for his dazzling scenes of wonderment.
My only regret is the length --I could have watched another hour of this and still not been satisfied.
Wilson and Emmett do not talk down to their audience but rather bring us along as they tease each other and in one case save each other from possible tragedy --it happens when Emmett begins experiencing the bend in fairly deep water.
It was made by Echo Bay Media co-founded by Andre Dupuis asnd Wilson and is produced by Jennifer Howe and Jeff Wilson.
This 13-parter will have you anxious to catch each episode. It builds on the skills developed during the making of Departures and is one of the very few must-see Canadian TV experiences of the season.
DESCENDING PREMIERES ON OLN ON SUND. FEB. 19 AT 9 P.M.
MY RATING: ****.
Posted by james bawden at 4:18 PM