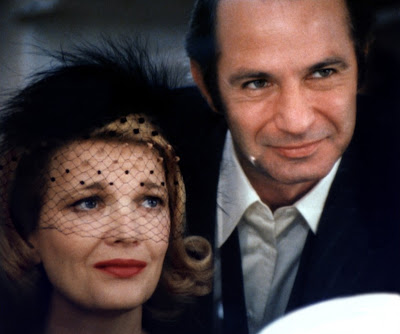 It's odd how little space was devoted to the passing of greatish actor Ben Gazzara.
He's one of the few actors who got away --in my career as TV critic I've interviewed almost everybody in person.
I did chat up Gazzara once --it was to promote a fine performance in the 2002 TV movie Hysterical Blindness which won him a supporting Emmy award.
On the phone he sounded as he looked --grizzled, impatient, sometimes quite ironical.
Born in 1930 in New York city to Sicilian immigrants. In 1951 he got a scholarship to the Actors Studio run by Lee Strasberg who became his chief mentor.
At the age of 23 he had Broadway fame in a sizzling adaptation of the novel End Of A Man which he filmed in 1957 as The Strange One. I recently caught it on TCM and Gazzara gives the year's best film performance so far as I am concerned.
Then he created the role of Brick in the original Broadway production of Cat On A Hot Tin Roof opposite Barbara Bel Geddes. It still seems strange to me --Dallas's Miss Ellie as Maggie The Cat.
"People always said I whispered my lines. That was to get their attention. Why yell when you can whisper? It's so much more effective."
In movies he scored a home run as the sadistic soldier accused of murder in Anatomy Of A Murder (1959) and the came roles in such films as The Young Doctors (1961) and Convicts 4 (1962).
It's strange but recently I've been watching the DVDs of Gazzara's 1964 TV series Arrest And Trial --an odd series that lasted 45 minutes an episode and was the forerunner of Law & Order. The series was so strange it was quickly cancelled. "When this happens the creators always say it was but in this case it was true."
Then Gazzara had big success on TV in Run For Your Life (1964-68) which was a clever clone of The Fugitive. "we had big all star casts. the first one, I remember we had Celeste Holm, Katharine Ross, Bob Loggia, Jacques Bergerac as guests -- that's pretty fancy for weekly TV."
It's the films he made with director John Cassavetes which will surely survive: Husbands (1970), The Killing Of A Chinese Bookie (1976) and Opening Night.
Working with Cassavetes, he said was "Something else. He was completely devoted to his actors. Few directors care the way he did,"
I read his autobiography In The Moment where he writes lovingly of a long affair with Audrey Hepburn.
"We made two movies together and she was as lovely as ever although she'd been away for a long time. Eventually she turned to working with the United Nations and had a bew career."
In movies he continued to astonish: The Spanish Prisoner (1997), The Thomas Crown Affair (1999) and Eve (2008). He has several unreleased titles --it's as if he stepped up his pace knowing he was going to die.
I wished I'd had the guts to ask about his second wife --actress Janice Rule whose work I also count as special.
Posted by james bawden at 9:52 PM