Kidnap & Rescue: Our World Of Violence 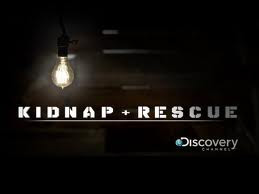 The world we live in has become so dangerous that a new series called Search & Rescue can premiere and run weekly with its harrowing tales of torture and survival.
Indeed kidnapping is now so common place that there's a growth industry in rescuing the high profile victims --it's one of society's most rapidly growing businesses.
K&D runs for 10 weeks with its dramatic recreations of these often unbelievable takes of abduction and subsequent rescue.
The level of cruelty shown here is terrifying --never before has network TV shown such barbarities. In the first few scenes I watched a kidnapped executive had his nose bashed in and a finger cut off --more might have happened but I had to turn away.
In Episode One HALO quickly intervenes in the bloody abduction of an executive with dual Mexican and American citizenship.
HALO is a private San Diego-based corporation headed by Brad Barker and a team of highly trained Special Ops, National Security and intelligence personnel.
The company was formed as violence erupted along the sensitive Mexican/American border.
The commando team enter the home and find rooms drenched in blood. Their conclusion: the executive must be dead.
They the call comes from the kidnappers demanding a huge ransom and threatening to retaliate in the most gory fashion.We see how the search is conducted using the most intricate of surveillance techniques, in effect turning the heat on the criminals, slowly moving into their territory, making them squirm and fear for their lives.
As bloody as two Rambo movies I couldn't turn away from this bloody but satisfying ending. But I'm not sure if I'd stick around of the victim wasn't properly rescued. Surely some cases go awry?
Barker is a charismatic guy and gives off that aura of knowing exactly how to fight the baddies.
I was determined not to like Search & Rescue. But it's smoothly made and shows me a way of international life virtually ignored by the national TV newscasts.
TV crime and punishment docudramas too often highlight the violence and ignore the larger life lessons. Here the dramatic re-enactments are scary enough but there's also expert integration of real footage however grainy.
Barker is a fountainhead of information, he's seen it all. He calmly shows us the methods the criminals use including forced captivity. Sometimes the abductors succeed all to well, I'm afraid.
This is TV for parents, what you need to know about protecting your kids. Impressionable children shouldn't be watching at all. In fact it will take me some time to recover from some of the graphic images.
KIDNAP & RESCUE PREMIERES ON INVESTIGATIVE DISCOVERY ON SAT. FEB. 18 AT 9 P.M.
MY RATING: ***.
Posted by james bawden at 11:16 PM