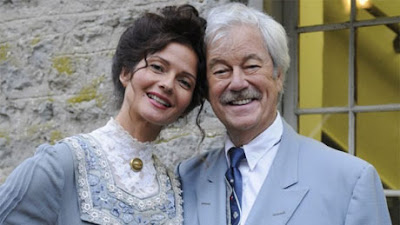 "Teatime Drama" used to be an industry term denoting family friendly TV dramas that ran in the early evenings.
Think Road To Avonlea. Think Pit Pony. Think The Campbells. You get my drift.
Well, for a long time CBC-TV has been trying to get back into the field of Teatime Dramas.
For one thing these series sell like hot cakes abroad. Road To Avonlea continues to make millions for Sullivan Films.
About the last attempt at Teatime was Wind At My Back which didn't quite make it to super hit status.
So maybe CBC might be having more success with Sunshine Sketches Of A Little Town which premieres Sunday night at 8 on CBC-TV.
The cast reads like a who's who of bright Canadian TV stars: Jill Hennessy, Donal Logue, Colin Mochrie, Debra McGrath, Peter Keleghan, Leah Pinsent, Eric Peterson, Ron James and there's the added bonus of Gordon Pinsent as the narrator Stephen Leacock who suddenly appears at the end of the two hour TV movie as a postscript.
If CBC programmers know what they're doing they should order a full season of these stories to be served up in an early hour time slot as perfect Teatime Drama.
The book came out originally in 1912 establishing its author, McGill University economics professor Stephen Leacock, as a literary super star of his day.
Indeed actor Douglas Fairbanks Jr, told me one of his prized possessions was an autographed copy of the first edition that had been presented to his father way back in 1917.
This TV version takes only two of the short stories --there are lots more to chose from and many fine comedic characters to also bring to the TV screen.
Hennessy shines as the dour, put upon wife Agnes Leacock whose carousing husband has deserted the family and gone off to try to start up his own railroad company.
Logue is the merry hotelier Josh Smith who is going to lose his liquor license unless he can get the rules bent.
Peter Keleghan is almost unrecognizable as the aptly titled Reverend Drone whose burps during his sermons are unwelcome.
Caroline Rhea gets real laughs as the slightly tipsy grade school teacher Mrs. Diston who is also a divorcee to boot.
Colin Mochrie is stern Judge Pepperleigh and Debrah McGrath is his wife. Eric Peterson is optimistic barber Jeff Thorpe and Ron James shines as the local undertaker Golgotha Gingham. Observing the proceedings is Owen Best as the young Stephen.
Don McBrearty who directed many of the better Avonlea episodes captures all the eccentricities of a small town Ontario community. The movie was shot in various small town and looks very handsome indeed.
In short CBC has a real winner here which if properly exploited could be turned into a long running classic example of Teatime Drama.
SUNSHINE SKETCHES OF A LITTLE TOWN PREMIERES ON CBC-TV SUN. FEB. 12 AT 8 P.M.
MY RATING: ***1/2.
Posted by james bawden at 1:44 PM