The River Is Fun And Scary 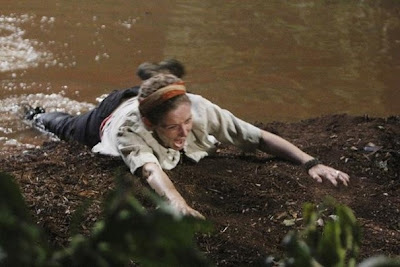 Get set for a deluge of new series as the American networks go into overdrive for what's termed "The Second Season".
On Monday night there was Smash which I hope will be a smash for NBC and CTV.
On Tuesday it's The River, a creepy, funny, paranormal adventure series set deep in the darkest stretches of the Amazon.
Both series were executive produced by Steven Spielberg who is a busy boy these days.
The River borrows freely from a lot of other movies and series you're probably familiar with.
Canadian actor Bruce Greenwood plays an intrepid TV naturalist Emmet Cole (think Steve Irwin) who mysteriously disappears while up the river filming his latest series.
He leaves behind a distraught wife Tess Cole played by another Canadian Leslie Hope who is determined to launch an expedition to find his ship --she's convinced Emmet is alive.
Of course they have an estranged son Lincoln Cole (played by Joe Anderson from Breaking Dawn) who was always neglected by a father usually off on another quest or adventure.
When a rescue mission is lauch it's funded by a documentaery film maker determined to turn everything into the latest TV reality show.
And so as the crew set off some of the shots are in grainy video, others handheld reaction takes, with lots of behind-the-scenes tension and drama.
In visual terms The River is spectacular. It was shot not in Brazil but in Hawaii and looks a lot like the hit Lost which cannot be coincidental. Four of the principal directors and producers are from Paranormal Activity.
Special effects abound including one dazzling scene where the ship's passengers are enveloped in a cloud of huge blue dragon flies. What a wonderful effect.
Every scene is exquisitely photographed as if this were a big budgeted movie.
The River is entertaining to watch even if the dialogue is frequently corn pone and some of the plot completely unconvincing.
Will TV audiences want to watch every week or not is all that ABC (and CTV) care about.
Think of this as Alien not in outer space but in a jungle settling with a dash of Joseph Conrad and a touch of The Thing tossed in for good measure. The fact we've seen it before is the most unnerving thing of all.
For Greenwood it's a return to his TV roots. I remember interviewing him as he left his first major TV project, St. Elsewhere in 1988. And I saw him again on the set of Knots Landing in 1991.
In Toronto I interviewed him on the set of Woman On The Run in 1993 --he was having a bit of trouble acting with co-star Tatum O'Neal.
His career jumped notches when director Atom Egoyan used him in the movies Exotica (1994) and The Sweet Hereafter (1997)
The last time I interviewed him he was back in an NBC series Sleepwakers (1997) that that lasted only a few weeks.
He and Hope have come a long way since those days and both deserve to headline a series as expensive as this one. They're now major TV series stars which is an elite category open to very few actors.
It's now up to TV viewers to determine if they want to be scared silly by these jungle antics on a weekly basis. ABC and CTV are hoping the answer is in the affirmative.
THE RIVER PREMIERES ON CTV AND ABX TUESD. FEB. 7 AT 8 P.M.
MY RATING: ***.
Posted by james bawden at 9:03 PM