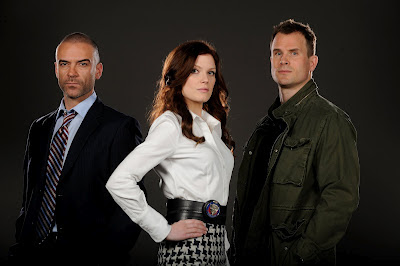 My taxi is speeding through southern Etobicoke and the driver poses this question.
"They make TV series down here?" he asks with a more than a tinge of skepticism.
Indeed they do --specifically the terrific police show King currently running on both Showcase and Global TV.
I'm on my way to interview executive producer Bernard Zuckerman for what must be the umpteenth time. For those of us who cover Canadian TV he is a symbol of survivability in a precarious business --making Canadian television.
Comfortably ensconced in an office that seems like a set right out of Mad Men --everything is so Fifties --Zuckerman ponders and says "We must have first met when I made And Then You Die in 1987."
"You see I always wanted to do Canadian TV movies and when they disappeared I had to switch to series. And here I am."
Brilliantly directed by Francis Mankiewicz, And Then You Die established Zuckerman as an incisive producer of reality drama --he'd come out of CBC-TV's current affairs department.
In 1990 he hit a home run with Love And Hate which was a rare CBC-CBS co-production that shone in the ratings on both side of the border and starred Kate Nelligan and Kenneth Welsh in the story of Colin and Joanne Thatcher.
Another big one was Dieppe (1993) starring Victor Gerber as Lord Louis Mountbatten, a Canadian saga if ever there was one --Prince Charles is said to have shuddered when he watched Garber's immaculate acting performance.
With Million Dollar Babies (1994) Zuckerman hired Beau Bridges as Dr. Allan Dafoe in the saga of the Dionne Quintuplets and once again CBS stepped for the American market.
"These days I wouldn't know who to reach at CBS," Zuckerman chuckles. "It's the same as at the Canadian networks where TV movies are out of style."
I remind Zuckerman of the time I was on the set of Savage Messiah (2002) and met the real victim whose arm was amputated by maniac //////////.
"That was a British co-production. We had to use Polly Ward in the lead and edit the film in London, England, which was quite pleasant."
With the two TV movies Chasing Cain and Chasing Cain: Face (2002) (starring Alberta Watson and Peter Outerbridge) Zuckerman used the plot of an older female partnered with a younger male detective.
Isn't this the basic plot of King, I innocently enquire?
"No! We should have sold that one to CBC as a series. But they had too many hour dramas right then."
Over at CTV Zuckerman did some of his best work: The Death And Life Of Nancy Eaton (2003), Murder In The Hamptons (2005) with David Sutcliffe and The Many Trials Of One Jane Doe (2005) with Wendy Crewson.
In 2004 he switched to series with CBC's This Is Wonderland starring Michael Riley. "It was often a complicated shoot," he says delicately of his often tumultuous relationship with creator George F. Walker.
After three seasons CBC cancelled the show calling it a 10 o'clock show "but they didn't have drama at 10 but news. We were on at 9 and that was simply too early in the evening for such fare."
CBC has yet to put out a boxed DVD of the third season --an example of the Corp's often lackadaisical approach to promoting Canadian content.
With King Zuckerman finds himself at Shaw Media which is revving up its Canadian production.
But why did the series go to air without an American co-producer (like Firewall or ()()()()()()).
"We did no pilot. I felt we didn't need one," Zuckerman says. "But that's what the U.S. networks want. They want to see a pilot and then make changes so they'll feel in charge. I'm still convinced we'll get an American pick up sooner than later."
Zuckerman says he had five strong choices for the lead of veteran detective Jessica King. "Amy Price-Francis was always the first choice for looks, acting ability and above all experience --she'd been in the first season of Californication."
Gabriel Hogan stars as her younger husband and Allen Van Sprang is her partner on the beat --I first interviewed hjm on the set of Earth: Final Conflict.
Co-executive producer Greg Spottiswood is the show runner and Zuckerman says "He's a real details man. He likes that kind of thing and it shows on camera. The show can only get better in the second year."
Joining the cast this year are Rossif Sutherland (ER) as joking hot shot detective Pen Martin and Karen Robinson as Ingrid Evans, one of Organized Crime Unit's most experienced members.
"We found ourselves very quickly in Year One," Zuckerman boasts. "In Year Two it's time to really shine."
And just to keep in the TV movie business Zuckerman produced the two hour TV movie John A. starring Peter Outerbridge as George Brown and Shawn Doyle as Sir John A. Macdonald.
"I was hoping for a string of movies like PBS's The Adams Chronicle. But ratings were low. So we'll see. In the Canadian TV business one must be an optimist."
THE SECOND SEASON OF KING DEBUTS ON SHOWCASE ON WED. FEB. 29 AT 9 P.M.
MY RATING: ***1/2.
Posted by james bawden at 9:08 PM