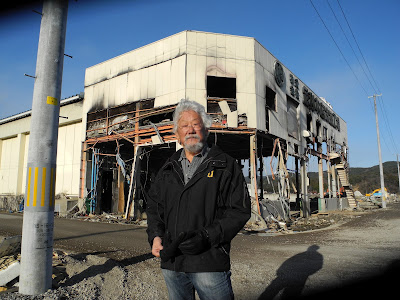 "This is one of those Nature Of Things programs I felt compelled to do, no question about that," says David Suzuki.
On the line from Calgary where he's making another NOT program, Suzuki is energetically pushing Journey To The Disaster Zone" Japan 3/11 which examines the after effects of the tsunami which wiped away thousands of coastal homes and thousands of lives and triggered a potential nuclear disaster that still haunts the nation.
Disaster is the first film made by Michael Allder since leaving NOT after 14 seasons as executive producer and one of the finest I've seen in recent years.
It hits all the buttons as it examines the strange Japanese reaction to these twin disasters.
"That's what floored me," Suzuki says. Although born in Canada he has deep roots in Japan --his grandparents returned to the country after World War II.
"What I witnessed was a degree of acceptance not seen in western countries. If this had happened in Canada there'd be demonstrations, outrage. In Japan there's resignation and acceptance. I think it comes from the postwar period of occupation and the reverence for all things American."
On March 11, 2011, a magnitude 9 earthquake slammed into the northeastern shore of Japan followed a half hour later by a monster tsunami with waves as high as 30 meters that washed away everything and everybody in its wake. And it also triggered a nuclear meltdown that still affects crops and fishing in this area --and will for decades to come.
Allder has come away with real finds in terms of footage unseen outside Japan. In one scene we're at a gigantic bridge that joined two mountainous regions --on that day school children were encouraged to congregate there and watch the tides which swept right over them killing all the children and teachers.
"If those kids had gone up the hill they could have been saved. The teachers thought it was too steep. We show the school which is no vacant, a chilling sight."
The consequences of the nuclear meltdown are just as chilling. "The local fish --inedible, it's a huge area and the Japanese are reliant on fish.The irony isn't lost on those who remember Hiroshima. Why would a country with that history ever believe in nuclear energy?"
We see Suzuki visiting with old friends and surveying the new technologies which can record up to 300 tiny earthquakes a day in the country. "And yet six nuclear plants (out of 56) are still going strong, the long term consequences we just don't know."
"The quake should be a lesson for us all. It shows the limitations of science when dealing with natural disasters. I was glad we came and think this one is very important. as you know for some seasons CBC only wanted us as a series to start in January. Now with the cuts coming up we'll have to see, nobody knows what is coming."
JOURNEY TO THE DISASTER ZONE:JAPAN 3/11 PREMIERES ON THE NATURE OF THINGS THURSD. FEB. 23 AT 8 P.M.
MY RATING: ****.
Posted by james bawden at 10:44 PM