Smash Is A Smash 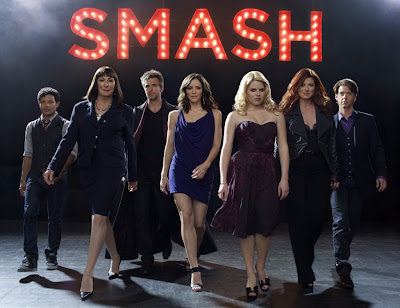 NBC has a lot riding on its new series Smash.
Like the very future of the network I'm supposing.
Remember NBC gambled buckets of dough that its remake of the British TV hit Prime Suspect would be the one viewers would pick in the fall.
It wasn't and NBC ratings crashed again leaving the peacock proud network mired in fourth place.
Just to make sure American viewers are aware of Smash there's been a blizzard of TV ads, online streaming, billboards, you name it.
And after watching the first two episodes on a DVD screener I'm still not sure.
Not that Smash isn't a greatish series. It's all about the making of a Broadway musical based on Marilyn Monroe and its stars include Anjelica Huston and Debra Messing.
And boy does NBC need a hit right about now, any hit will do. Just last week industry trades had NBC in eighth place on Thursday nights at 10 p.m. Remember this is the time when ER would routinely draw 40 million or more viewers.
Now even Jersey Shore beats NBC after Prime Suspect was suddenly cancelled.
That's why I'm relieved to report Smash is almost a smash. But will it succeed? That's another matter.
First of all the show boasts impeccable credentials. Garson Kanin wrote the original novel, the basis for the story. Listed as creator is successful executive producer Theresa Rebeck (NYPD Blue). Michael Mayer directed the first episode with flair.
Original songs are written by Tony and Grammy winner Marc Sherman and Scott Wittman.
Debra Messing stars as Broadway show tune writer Julia Houston married to a high school science teacher Frank Houston (Brian d'Arcy James). Julia's partner is perennial optimist Tom Levitt (played by Christian Borle).
Anjelica Huston is Broadway showrunner Eileen Rand who desperately needs a new hit so she can shove it to her departing husband.
Jack Davenport is the directorial genius Derek Wills who is mounting a first dress rehearsal and must chose between two very different candidates to play Marilyn.
There's busty veteran Ivy Lynn (Megan Hilty) who has been dancing on Broadway for a decade and dewey newcomer Karen Cartwright (Katharine McPhee) who has a dazzling voice --she lives with City Hall PR head Raza Jaffrey (Dev Sundaram).
A whole heck of dough has been tossed at the first two episodes I saw.
And yet at times the proceedings were so campy I kept thinking of that other Manhattan based dramatic clinker Central Park West with John Barrowman --remember that one?
Everyone here is so bound up with their show bizzy lives that there's not a joke cracked. Anguish and intensity follow this crowd all the days of their lives.
Some TV critics are going to dance in the aisles at Smash but what about the great unwashed audience in middle America? Will they care about a series that's all about putting on a show. I mean Broadway going is an elitist experiment. Let's not forget Smash is up against Jersey Shore which truly does know its audience!
The case against Prime Suspect was that it was irrelevant, using an overly familiar plot that was 30 years old. The buzz about big, incoming series is usually wrong --look at how quickly Lone Star bombed.
Once upon a time (1984 to be exact) NBC was in equal dire straits and one great hit --The Cosby Show--revived its entire Thursday night lineup and allowed such hits as Seinfeld and ER to grow and prosper.
That won't be happening again because of the fractured TV audience.
Smash is different than other network fare, it's well acted (particularly by Messing and Huston), sports recognizable characters and a fair degree of soap opera plotting as well as the requisite beautiful people. It takes itself a bit too seriously but that commitment may work in its favor. The New York locations are beautifully showcased and it could have you rooting for either Karen Cartwright or Ivy Lynn.
Watch Smash. Enjoy Smash. It's as good as a TV serial gets these days. I hope it lasts for seasons to come.
SMASH PREMIERES ON CTV (AND NBC) ON MOND. FEB. 6 AT 10 P.M.
NOTE: AN ADVANCE DIGITAL SCREENING OF THE FIRST EPISODE IS RUNNING ON CTV.ca UNTIL MOND. FEB 6 AT MIDNIGHT.
MY RATING: ****.
Posted by james bawden at 12:31 AM