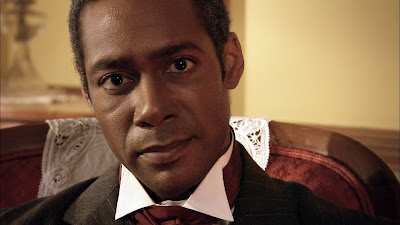 Once again American network PBS has come up with the best Canadian history program of the month.
Last fall it was The War Of 1812 and now it's the gripping story of William Still and his efforts to help black slaves fleeing to freedom.
Underground Railroad recreates those harrowing times in brilliant images and for many fugitive slaves the end of the journey was freedom in Canada.
"Our story has everything and it's all true," says producer Gordon Henderson of Toronto's 90th Parallel Productions which made the exciting hour special for Buffalo's WNED-TV.
For one thing few photographs exist of the harrowing tales because the journeys were made through hostile Southern states where slavery was a way of life. Henderson had to visually recreaet these sprints to freedom and does so brilliantly --fugitives could be shot dead at any time during escaping.
For Southern slave owners its was frustrating to see slaves simply vanish. Founding father George Washington blamed Quaker activists when one of his own slaves suddenly vanished.
"It's a story that still resonates today," says Stratford actor Dion Johnstone who stars in the dramatic portions as black activist William Still who was deemed the father of the Underground Railroad.
Says Johnstone: "Many of us can relate to that feeling of being separated from family --never knowing what relatives are out there."
Indeed the highlight of the hour comes when Still interviews one fleeing slave and realizes he is a long lost brother who he never met before. Dramatically it is a hugely satisfying moment.
Johnstone says all his big scenes were filmed in a week. It's odd but in his appearances as Still he rarely speaks except for moments when he turns and talks directly to the camera.
"We had Still's journals to work with," Henderson reports. "That seemed to be the best way to describe the sprawling story."
Henderson says he knew the broad outlines of the story of the Underground Railroad but not the key part played by Still. "As we researched it was apparent his own journey was the best way to personalize the narrative."
In broad strokes the special examines the economics of slavery and the cruel conditions most of the four million blacks had to endure. At least 100,000 had already escaped to freedom on the North by the time of the passage of The Fugitive Slave Act in 1850. That federal act meant bounty hunters could legally abduct fleeing slaves living in the free Northern states and return them to their masters and made it a crime for any one to interfere in any way.
Henderson had to ensure costumes were historically accurate as well as the houses and paraphernalia of the times. He says the dramatic reconstructions had to be done just right --scenes were shot on "living history" plantations in the South and in period locations in Southern Ontario near historic black communities in Niagara Falls, Toronto, Chatham and Windsor.
Says Henderson: "After the passage of the Fugitive Slave Act the fleeing slaves had to cross over into Ontario to ensure their safety. It's estimated at least 40,000 did so. After the Civil War some returned but others stayed and built homes in such areas as St. Catharines and Chatham."
In the 1850s Still travelled through Ontario --he'd heard reports Ontario was snow covered for 10 months of the year and how famine was a yearly occurrence.
When shown this was not so Still could return and route former slaves to a new life where they could own land and farm and even have their children attend public school.
The day I chatted with Johnstone on the phone he was guesting on the police series King. He said he's decided not to return to Stratford where he shone this season but try for more TV work.
Directly addressing the TV audience works because of his Stratford experience.
"I wanted to do justice to Still and all that he did but also to make him seem vital and alive. It's living history, what he did for his people was truly remarkable."
Henderson says he has other ideas for specials about history that criss cross the border --for example the Yukon Gold Rush which waas largely peopled by American miners.
A more recent example I can think of is the Sixties influx of American draft dodgers and how they changed Canadian culture. ia
UNDERGROUND RAILROAD: THE WILLIAM STILL STORY PREMIERES ON PBS ON MOND. FEB. 6 AT 10 P.M.
MY RATING: ****.
Posted by james bawden at 1:58 PM