Should Smash Be Re-Titled Crash? 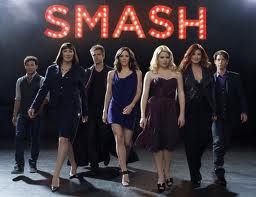 Four weeks ago NBC plopped two new series onto its schedule.
Smash got wildly enthusiastic reviews while The Voice was less well received.
And now?
Smash is crashing wile The Voice is up almost 50 per cent in ratings and is now in a a tie with American Idol as most watched musical series of the week.
How could this happen?
I previewed Smash and thought it highly original and well acted although I wondered how it might fare in the great American heartland where few people have had the opportunity to pay $100 a ticket to watch a Broadway musical. Also, my spies in L.A. told me a whole hunk of the total budget was spent getting the pilot just right meaning subsequent episodes would not be produced to such a high quality.
And that's exactly what happened.
When I watched last week's episode with guest star Nick Jonas I couldn't believe how predictable and ordinary the show had quickly become.
Every soap opera cliche was unveiled, there was no dramatic momentum, it was a real chore having to watch for the entire hour.
Last week the cheerfully unpretentious The Voice garnered 14.9 viewers for NBC while Smash crashed to a new low of just 6.6 million.
When I talked to an old friend in Buffalo she said it was a case of NBC not knowing its audience.
NBC made the same mistake this fall in presenting a new version of the British TV hit Prime Suspect only to see it spectacularly flame out in the ratings.
A friend at CBS told me there's a reason his network sticks with tried and true procedurals which in some cases having been running for a decade or more.
It's this truism: it's getting harder and harder to mount a new series because viewers simply do not have the time they once did to sample the new wares and stick with a series until it finds its bearings.
We live in a TV universe of 100 competing channels. And there are other ways to watch TV shows these days from Netflix to YouTube to Rogers On Demand. So TV ratings are stalled if not actually falling for conventional networks and will continue to do so.
Two seasons back NBC cancelled all its 10 p.m. dramas to make way for the new Jay Leno show --a programming disaster it has yet to surmount.
That means all its 10 p.m. dramas are necessarily new and enticing viewers back is going to be a long haul.
NBC's new fare this season included The Playboy Club (already cancelled) and The Firm which has been a ratings bust from the beginning.
NBC has a new programming czar in Bob Greenblatt who has been realistic about the network's short term failures.
If he wants a role model he should look to CBS which remains solidly number one in the ratings based on unexceptional procedurals which do not ask to much of the audience and delivery dependable thrills week after week.
Maybe Smash was too good for network TV, maybe it would have fared better on cable --except that the weekly budge was too high for Showtime or HBO.
NBC has said the show will probably be renewed for a second season but moved to another night. There simply isn't anything in development quite ready to replace it.
Posted by james bawden at 1:30 PM