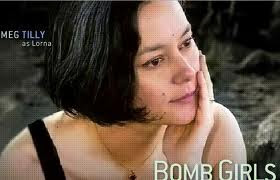 It was a real treat chatting up elusive actress Meg Tilly who was phoning from her home on Vancouver Island.
I hadn't seen her since she was in Toronto in 1993 as a guest star in the series Road To Avonlea.
She retired shortly after that to raise her three children and is only now returning to acting in Global TV's new six-part series Bomb Girls. In the intervening years she's become a widely praised novelist.
"I said I'd audition to this as a favor to my agent," she laughs. "To humor him I took the ferry with my husband to Vancouver and we ate junk food and had a day of it.
"And I thought, sure, I'll audition but I wasn't looking for work. It's just that I wanted to keep my agent who doesn't get much money representing me."
Tilly tentatively tried acting again in the fall in a Victoria production of Who's Afraid Of Virginia Woolf? Where she garnered great reviews.
"I always told my husband if I do go back it has to be for the challenge. And Martha was as challenging as it gets. I first had to memorize that huge play. Could I do it? And there was the physical effort --on matinee days I just stopped speaking except on stage to save my voice."
Last year Tilly also did three cameos in the B.C.-made TV series Caprica, a spin-off of Battlestar Galactica so she could hang out with her old pal Eric Stoltz. They had worked together in the movie Sleep With Me (1994).
"For the Bomb Girls audition I listened to what producer Adrienne Mitchell was saying. She sold me on it. I loved the first script. I immediately hooked onto the part of Laura. I sort of understood her plight as the matron of a munitions factory in Toronto during World War II. I wanted the part. They wanted me.
"I came out of the audition and told my husband " You won't believe this but I think I'll do it. And he looked really startled."
What clinched the deal for Tilly was the promise that this would be a resolutely Canadian production with great attention to period detail.
"When I walked on the munitions factory set ain the Distillery District on the first day I thought oh no it's not ready. This was Sunday and we started on Wednesday. But they made it --the crews worked around the clock. And everything is perfect --the plant, the way the girls dressed, the hair, makeup. It's a very expensive production because the Toronto of the Forties no longer exists."
Tilly shines as the dour Lorna who is plopped from the assembly line to become matron for over a hundred girls assembling bombs for the Allied war effort.
"We gradually learn Lorna's back story and why she's like that," explains Tilly. " You'll understand her better, don't worry. Her husband (played by Peter Outerbridge) was invalided in the Great War and still limps around. She's aware the girls' lives are on the line in this dangerous assignment and indeed one becomes seriously injured early in the story."
And Lorna shows her own prejudice by ranting against an Italian-born young man she views as the enemy.
The other girls are a motley bunch including rich girl Gladys (Jodi Balfour) who the other girls suspect is just slumming around.
And there's Kate (Charlotte Hegele) who uses the job to escape from the fundamentalist preaching of her devout father.
And Vera (Anastasia Phillips) is the saucy one who comes quickly to no good.
"We block shot it," Tilly says meaning all scenes set in the factory for a few episodes would be shot before moving on to the next venue. "The writers made t work, it just flows and we had three expert directors in Ken Girotti, Adrienne Mitchell and Anne Wheeler. I tried to memorize as far ahead as possible because I wanted to get her character. It was a stretch but I like hard work.""
Tilly isn't at all certain how Canadians will take to a completely Canadian TV series, one about an aspect of our history that's almost unknown.
"The women had to grow up fast. And then at war's end the lost their jobs to the men returning from battle. And many wound up in the Fifties out in the suburbs. It's such a sad story in some ways."
She's committed for another season if the show gets picked up. And she continues writing fiction.
"But next I'll be acting again in Toronto at Taragon Theater in a Michael Tremblay play."
BOMB GIRLS PREMIERES ON GLOBAL TV ON WED. JAN. 4 AT 8 P.M.
MY RATING: *** 1/2.
Posted by james bawden at 10:29 PM