Digging For Britain Is Smart TV 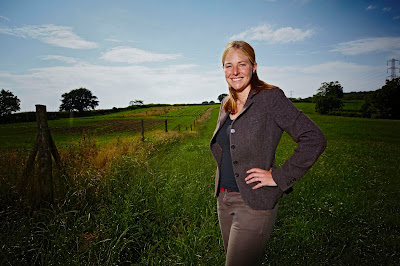 Has this year's downright awful crop of new TV shows been getting you down?
Sit tight --hope is on the way.
Season 2 of Digging For Britain arrives just in time.
This is TV for the Smart Set. All those craving moronic reality shows should look elsewhere.
Dr. Alice Roberts wanders far and wide as she visits sites around the tight little island where important archeological discoveries are being made.
In the first new hour, Britannia, she looks at digs where important new information about Roman Britain is being unearthed.
And it's pretty exciting stuff. At Folkestone she shows how the once flourishing Roman port offers fresh clues as to how the Romans first invaded Britain in 43 A.D.
The site of a once flourishing Roman port is being excavated and one huge structure currently being dug up was the vast palace of the commander of the fleet.
At another site graves of 97 baby skeletons are discovered --one expert thinks the whole structure must have been a Roman brothel because of the knife wounds still clearly visible on some of the tiny bones.
But DNA testing indicates something e;se --it could be a Roman birthing center where the midwives attempted interventions to save the lives of the mothers.
In Exter we see an excavation of a small Roman town whose discovery turns history upside down --Roman civilization supposedly never reached Exeter. But the pottery examples show Roman cults flourishing here. Dozens of Roman coins show commerce flourished.
There's an amphitheater at Carleen. And the biggest find is a warehouse filled with art objects --the historian likens it to a modern storage locker--it shows the prsence of Roman culture long after the Romans supposedly abandoned England.
One factory system at Bare Regis shows a tanning site --proving some Roman soldiers chose not to return home but instead turned from soldiering to trade.
Made by BBC (of course) Digging For History challenges us at every turn. It also assumes a fair bit of knowledge and interest. Whereas Reality TV panders to the lowest common denominator, Smart TV like Digging For Britain challenges us at every turn.
Subsequent programs look at sites of Viking colonization, the Bronze Age Britain, and Stone Age communities in the Channel islands.
DIGGING FOR BRITAIN RETURNS TO DISCOVERY WORLD HD ON THUSD. JAN. 5 AT 8 P.M.
MY RATING: ****.
.
Posted by james bawden at 3:31 PM