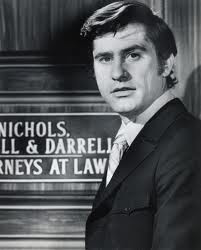 TV is an ephemeral business. Look at the experiences of two TV actors who enjoyed great fame on TV only to vanish for long stretches of time: James Farentino and Robert Hegyes.
Farentino passed last week aged 73 after decades of weaving in and out of such TV series as The Bold Ones, Cool Millions and Dynasty which is where I met and interviewed him.
And then there's the equally strange case of Robert Hegyes who also died this week of cardiac arrest at 60 --he was one of the original sweat hogs on Welcome Back Kotter which is where I first met him.
Farentino first stepped on the Broadway stage in 1961 as one of the beach boys trying to molest Bette Davis in the Tennessee Williams play The Night Of The Iguana.
In 1966 he copped a Golden Globe as most promising male actor in the hit film comedy The Pad And How To Use It.
Along the way came four wives including actresses Elizabeth Ashley and Michelle Lee.
I had lunch with Farentino on the set of Dynasty in July 1981.
The series debuted in January 1981 and ratings sank like a stone. It was intended as producer Aaron Spelling's retort to Dynasty but the casting was off and the ploys lacked tension.
ABC wanted to cancel it but creators Esther Shapiro and Spelling argued rejigging the cast might save the show so Farentino and Joan Collins were brought on in the first full season that debuted in September 1981.
Collin's vixen Alexis saved the show but Farentino seemed lost and only last 20 episodes.
He continued his TV career in such series as Blue Thunder (1984), the miniseries Sins (1986), the sitcom Mary (1985-86) opposite Mary Tyler Moore and the series Julie (1993) and Melrose Place (1998).
I was on the set of the series Welcome Back Kotter (1975-79) before it went to air with other visiting TV critics.
The original pilot shown to press presented Hegyes as the lead sweathog Juan Epstein but I was one of the scribes who said wait a minute it's gong to be the other guy.
That "other guy" turned out to be unknown John Travolta as Vinnie and he's soared ever since.
To my intense surprise I met Hegyes again years later on the set of Cagney And Lacey. It was 1988 and he was playing the recurring part of Detective Manny Esposito.
In later years he guest starred on such series as Diagnosis Murder and Murder Scorpion and even taught drama at Venice High School for several years.
He told me how toxic TV fame can be and only wanted to continue developing as a character actor.
Farentino blamed the bad publicity he received for allegedly stalking girl friend Tina Sinatra that led to his being less than in demand in later years.
Both were gifted actors who discovered on TV there are few if any second acts.
It's the nature of the business as TV series constantly crave new faces over tried talents.
Posted by james bawden at 11:57 PM