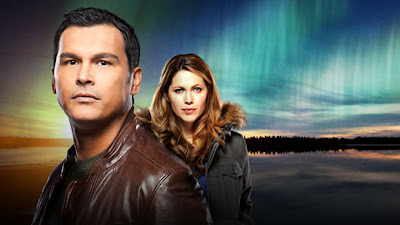 Regional TV --it's always been the buzz phrase when CBC fashioned dramatic TV series.
Getting out of its cramped Toronto studios and into the various regions has always been CBC's quest.
Hey, it worked wonderfully well for seven seasons and 91 episodes on CBC's Vancouver-based DaVinci's Inquest (1988-2005) didn't it?
But not so well at another series shot in Vancouver, Intelligence (2005-07) which only lasted two seasons.
Another CBC West coast series These Arms Of Mine (2000-01) faded even faster.
It didn't work in Nova Scotia for the short lived CBC venture Black Harbour (1996-99) which lasted three seasons or 39 episodes.
And am I the only one who remembers the one season notched by CBC's Edmonton drama Tom Stone (2002-07)
?And now comes another CBC regional venture Arctic Air clearly patterned after the History TV reality series Ice Pilots --and made by the same production company, Vancouver's Omni Films.
But CBC is hoping to snare that same armosphere that made its North Of 60 such a long running hit.
What emerges in the first episode is an old fashioned sort of adventure series with some side glances at modern life in the north.
Kevin McNulty co-stars as Mel, a gnarled old pilot whose rickety airline Arctic Air still flies with DC-3s that are almost coming apart at the seams.
Nobody wants to fly them so the latest recruit is an adventurous East Indian recruit (*)()() played by Stephen Lobo (Godiva's) complete with a convincing accent.
And who should wander in but one of the absentee co-owners, Bobby (Adam Beach), who has graduated into a top businessman who wants to show his partner the location for a diamond mine.
Then there's Mel's comely daughter Krista (Pascale Hutton) who happens to be the best pilot around. And. of course, she used to be one of Bobby's girlfriends in high school.
It was about then that I sat up and shouted "Whoa!"
The attempt to cast Beach as a suave ladykiller type just ain't gonna make it. I'm hoping it can be downplayed in future episode because the dude looks mighty uncomfortable.
Most of the first episode is very tentative. And that's to be expected until the series finds its legs.
So far it succeeds as mild adventure fare --a pregnant wife has to be airlifted by pilot Mel during turbulent weather --Mel also has heart problems and shouldn't be flying at all.
Although the series is shot on sets about a mile out of Vancouver it's supposed to the North West Territories.There are the standard sets up for the conversation intervals between the action scenes.
Beach did not appear all that at ease in his last TV series, Law And Order: SVU. Here he hopefully can grow into the part but on TV these days series must hit the air running with precious little time allowed for tinkering.
With many of its "regionals" CBC gave understandings the shows could last two seasons because CBC's promotion budget is low compared to the cutthroat American TV competition.
You'll stay watching at the beginning for the dazzling arial photography and the suspense of the plot.
Whether you stick with Arctic Air over the long haul of 10 episodes depends on the writers delivering tauter scripts and the actors becoming completely engaging in their parts. And that hasn't happened yet.
But in a TV season almost devoid of home grown hits I'm rooting for Arctic Air to succeed.
ARCTIC AIR PREMIERES ON CBC-TV ON TUESD. JAN. 10 AT 9 P.M.
MY RATING: ***.
Posted by james bawden at 11:59 PM

How is Adam Beach as a ladykiller not convincing? He's objectively good looking. Not only that, he has an addictive personality in real life and it's pretty clear that he injected a lot of himself into the role.

Also, I believe I read that only half of it is shot on sets while the rest is shot in Yellowknife.

Well, here it is March 20, and Arctic Air finished up its first season last week, much to my dismay. I'm hooked on the show, and I sincerely hope there will be more next year. I just wish there were more shows each season. It's a good story, interesting characters, lots of suspense, and it's nice to see the aerial views of the NWT. Can't wait to see what happens next!