Teaching The Life Of Music Worth Watching 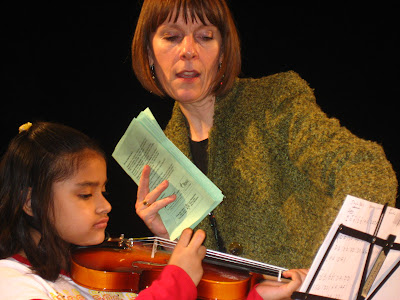 This is the TV year when Canadian TV became virtually extinct on Canadian Networks.
Most Canadian channels have simply become simulcasting outposts for the American fare already available on border U.S. stations.
And then along comes a perfect example of what Canadian TV should be.
Produced on the proverbial shoestring budget the hour documentary Teaching The Life Of Music is to use an old phrase --pretty swell.
I hesitated to plop in the DVD screener because of the unfortunate experiences I had as a budding cello student with a maniac of a high school music teacher.
However, I persevered and watched and the more I saw the more I liked it.
It follows the concepts of El Sistema, a successful campaign to teach the rudiments of music to poverty afflicted students in the slums of Venezuela who must work together to achieve their goals.
And the Canadian angle comes at Toronto's Rogers Centre when El Sistema's Simon Bolivar Orchestra (SBYO) plays for a capacity audience of Canadian students.
Founded more than 35 years ago by a charismatic teacher Maestro Jose Antonio Abreu, it is wide ranging and ambitious in its scope. It begins naturally enough profiling the now aged music leader and the great success he has enjoyed --and how playing music together teaches the young.
The footage expertly blends interviews with the orchestra leaders in Venezuela with a look at the Canadian attempt to jump start an El Sistema program of our own.
We get to meet some of the Canadian children who are just beginning to study and play. And they get to meet leaders of the Simon Bolivar orchestra and rehearse a bit with them.
There's also a look at the decline of music in Canadian schools. as school boards cut programs to balance their budgets it's apparent music classes are the first to be dumped --instruments are costly to purchase and maintain.
Directed skillfully by David New, produced by Filmblanc,it has Canadian Cory Monteith as narrator. And it's highly recommended. I think you will learn from it but also be entertained.
Teaching The Life Of Music demonstrates to me indigenous Canadian TV production may not be as down and out as I feared.
TEACHING THE LIFE OF MUSIC PREMIERES ON OMNI SUND. JAN. 22 AT 9 P.M.
MY RATING: ***1/2.
Posted by james bawden at 12:46 AM