Global's The Firm Is New And Worth Watching 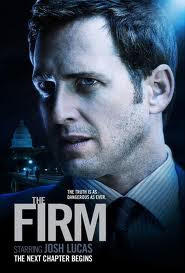 I've got a new term for you --"Hybrid TV".
You've heard of hybrid automobiles, heck, maybe you even own one.
But what about Hybrid TV --what the heck is that.
Check out Global's new series The Firm if you want to find out.
Global TV is bringing the John Grisham novel to TV seriesdom with support from NBC, Sony Pictures and Paramount.
Remember the smash 1993 movie with Tom Cruise? Well, that was a mere 19 years ago, a pretty long time for a TV sequel to come along.
In truth CBS had been dickering with the concept for a few years with Lukas Reiter listed as creator. When CBS finally passed Reiter shopped it to Global and NBC and it became a Hybrid with Global's participation.
So enthusiastic were the partners that 22 episodes were ordered, a rarity in today's crowded TV landscape. And novelist John Grisham was involved in the initial batch of stories --another Grisham novel The Client got badly mangled in the TV transition.
Filming started in Toronto in August with Entertainment One listed as the production company.
To qualify for Canadian content most of the cast and crew had to be Canada-based.
But American import Josh Lucas (Sweet Home Alabama) came in for the lead as U.S. lawyer Mitch McDeere and another talented American Juliette Lewis (Natural Born Killers) co-stars as his chain smoking secretary Tammy Hemphill.
The Canadian contingent includes Callum Keith Rennie as Mitch's brother Ray and Molly Parker (Driftwood) as Mitch's ever loving wife Abby McDeere.
I spotted a lot of familiar Canadian faces among the supporting contingent. David Straiton (House) directed the pilot but multi-talented Helen Shaver is set to direct many later episodes. And among the writers there's Canadian Allyson Feltes who produced the Canadian legal show The Associates for CTV a few seasons back.
The TV series hops forward 10 years after the movie where Mitch and his wife have spent time hiding out under the U.S. Witness Protection plan for bringing down the mob-controlled law firm.
The opening scenes are taut as Mitch is shown escaping through Washington D.C. including a stint through the reflecting pool and away to anonymity.
In Mitch's return to law his practise is located in a deliberately small family firm with one secretary and a leg man. The entire family has endured unbelievable stress. When their 10-year-old daughter catches the family in a meeting in the kitchen she assumes they're going on the run again and breaks down sobbing.
The premiere episode is all confusion. There's the exciting chase followed by convoluted talk about whether Mitch should join a high priced law firm. There are flashbacks within flashbacks. I was uncertain for a bit just where the story was taking us.
After the chase the first two hours settles down to a fairly detailed description of a case of a young man who shot a taunting school mate in a rage. In its exploration of the leal points it came across as pleasantly old fashioned and without the usual gimmicks of today's legal shows.
Lucas is a fine actor who can play Mitch as a decent man without making him boring. Parker and Rennie are something of a team --other TV series they've co-starred in include Twitch City and Global's recent show Shattered. Parker seems determined not to play Abby as just another stay-at-home housewife. I mean what other series around would have the action stop and the wife explain the merits of the classic American novel Native Son to her husband?
Rennie's tough, threatening private eye seems a character who has stepped out of some old film noir thriller but that's OK too.
The Firm has enough of these authentic moments to make one want to revisit it several times before passing final judgment.
THE FIRM PREMIERES ON GLOBAL ON SUN. JAN. 8 AT 9 P.M. BEFORE MOVING TO THURSDAYS AT 10 P.M.
MY RATING: ***.
Posted by james bawden at 11:34 PM