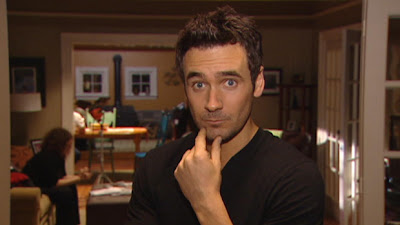 Boy does CBC need Republic Of Doyle.
This has been the TV season when Canadian dram series edged toward extiction --on Canadian networks.
In one flash the return of Republic Of Doyle for its third season shows how important CBC is to telling Canadian stories with Canadian talent.
And Repubic Of Doyle has gotten better with each season.
Not that it ever was a dog but I noticed the polished cinematography of Malcolm Cross and the script packed with one liners from star Allan Hawco and co-creator Perry Chafe..
And for once CBC is banging the publicity drums to get people watching.
The guest appearance of Hawco's buddy Russell Crowe should be a big selling point in the ratings.
Crowe filmed his scenes last summer and everything about this episode exudes warmth.
Getting the buff Australian to do TV was a huge coup --he's currently preparing for the lead as Jean Valjean in a new movie version of Les Miserables.
He appeared only with three of his buddies from his Robin Hood epic: Alan Doyle, Scott Grimes and Kevin Durand.
Truth to tell his part is rather easy and he hardly hogs the TV screen. The story is all about Doyle trying to track down a killer and get gal pal Leslie reinstated in the police force.
Crowe seems to be the beefy head of a gang of extortionists who are out to snatch a mysterious briefcase filled --with what?
Sporting a as shaggy beard and clothing that looks second hand Crowe steals scenes with his slow deadpan delivery.
The biggest character on ROD is St. John's itself from the initial sweeping shots of the harbor and those rows of brightly painted houses.
In fact I though Canadian actor Daniel MacIvor has a better part which he expertly mines for twitchy laughs. I've liked McIvor's work since seeing him in that CBC gem Twitch City.
Stories seem a strange cross between the A Team and Rockford Files. It's a point of view that takes some getting used to but for once with a CBC drama I'm hooked.
The supporting cast remains strong: Sean McGinley as dad Malachy, Lynda Boyd as his fiancee Rose, Kristin Pellerin as Const. Leslie Bennett. Marthe Bernard as Tinny left for education abroad but Mark O'Brien as Des is now studying psychology at university..
Also scheduled for guesting duties is Reality TV star Shannon Tweed who is a proud born and bred Newfie. And I'd really like to see Gordon Pinsent back again.
Republic of Doyle is that rarity, a well made indigenous TV series that's a delight to watch.
And by the way this isn't the first CBC series to ever be made on The Rock. Anybody else out there remember Hatching, Matching And Dispatching?
THE REPUBLIC OF DOYLE RETURNS FOR ITS THIRD SEASON ON CBC-TV ON WED. JAN. 11 AT 9 P.M.
MY RATING: ***.
Posted by james bawden at 12:26 AM