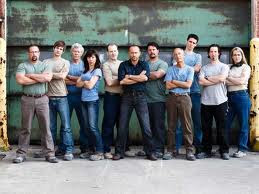 I never thought it would come to this --Discovery Canada which is an upscale science specialty channel has gone the way of reality TV.
And the result is kind of fun, I'm admitting.
Titled Canada's Greatest Know-It-All this loopey but entertaining series takes 10 Canadians who think they know everything and pits them against each other.
It's sort of Fear Factor plus brains.
Well, maybe not quite. So far in the DVD preview I've seen there are no death defying acts or incidents of sheer grossness such as swimming in a pool filled with wiggly worms.
This time it's knowledge that is king. They get involved in leadership skills, game playing, problem solving but on a very big scale.
There are 10 contestants but only two women --I'd like to chat to the producer about that anomaly.
How they were selected isn't as precisely laid out as it should be. Apparently there was a contest and aspiring Discovery stars had to submit videos.
We get to know a few of the 10 in the first hour and will probably meet up with the rest later on.
One of the skills in the first outing involved building a shed of plywood, some boards and rope and seeing how it would fare on a cliffside against wind powered machines.
There were two teams of five each and the object was to see who could construct the most durable cabin --a stuffed pig was placed inside both houses.
I'm honor bound not to give away any endings but the conclusion surprised me.
I stayed watching.
The second competition was weird --two of the finalists --in fact the oldest two --were pitted against each other in a series of Boy Scouts achievements and the one who won was a true surprise --it was a battle of an educator versus a blue collar worker.
In subsequent competitions they'll have to determine the correct release of a bomb dropped from a Lancashire bomber, arrange an anatomically correct human skeleton from bones stuck in blocks of ice and construct a trebuchet to play an ultimate game of Trojan Basketball.
And at least one contestant gets voted "off the island" every episode--the first season runs for eight weeks.
But the biggest challenge of all is this: Will you turn in next week after sampling the premiere episode?
It all depends whether you're good at playing games or not.
CANADA'S GREATEST KNOW-IT-ALL PREMIERES ON DISCOVERY CHANNEL MOND. JAN. 30 AT 10 P.M.
MY RATING: ***.
Posted by james bawden at 10:54 PM

Have you ben living on the space station? Most of their shows involve blowing things up, tearing things down, or smashing stuff.