Good News: Californication Is Back 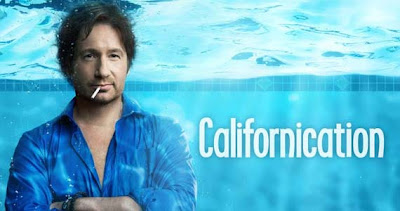 Californication is back for its fifth season starring David Duchovny as the wasted but talented script writer whose amatory adventures would try a man half his age.
Some of my friends dig this show. Some are repulsed.
There's a lot of nudity here and simulated sex scenes and many of these shots are of actors and actresses past their prime. So no ways is Californication soft core TV eroticism.
Yes, I laughed out loud during the first new episode because Duchovny's deadbeat delivery is supreme. Being a writer Hank always has the perfect line to explain any embarassing stuation.
Seeing his friend and agent Charlie going at it he remarks "Any naked friend of Charlie's is a naked friend of mine."
Remind me to say that when I happen upon a naked friend which I've never done as yet.
All sorts of words usually never heard on television including cable are bandied about. But after five seasons the shock factor has long disappeared.
Quite frankly when it comes to TV I think Mad Men sexier by far.
Too much sex is too much of a good/bad thing. That's why I started tuning out Nip/Tuck after the second year. Been there, seen that, I guess.
Californication was created for Showtime in 2007 all about a sexy writer named Hank Moody (get it) who has writer's block. At 28 minutes it's a rather long situation comedy.
As I watched I wondered if an "Airline Version" was being made at the same time.
That ruse was tried on The Sopranos and means the elimination of most swear words as well as most nudity. But if all that were snipped what would be left?
Creator Tom Kapinos agreed with critics a fresh approach was needed for the fifth season. I agree but it's not immediately apparent in the first new episode which I've previewed.
So the narrative takes place two years after Season 4. Madeleine Martin and Natascha McElhone are back as Hank's daughter and ex-girlfriend. But his ex-wife is now married to her professor. But that's all the plot I'll reveal here.
I find Californication has lots of male fans but not so many females. Hank's misogyny is part of his makeup. He hasn't so much grown wiser with the years but he's certainly grown older, sadder, he looks very tired and no wonder.
I keep watching for its malicious take on the entertainment industry. Duchovmy gives a dead on performance but it's hardly in the leading man mold of Scully.
Moody is self destructive and he knows this and can't do anything about it. Usually we wouldn't care about such a character. The brilliant writing makes us care.
Nothing much seems to happen in the first new episode. But there's a lot of catching up to do. I guess I'll stick with it to the bitter end. I'm still worried how Hank Moody will finally turn out, for better or worse.
CALIFORNICATION 5 PREMIERES ON THE MOVIE NETWORK ON MOND. JAN. 9. AT 10:30 P.M.
MY RATING: *** 1/2.
Posted by james bawden at 10:31 PM