Ron James Rolls In Another Year on CBC-TV 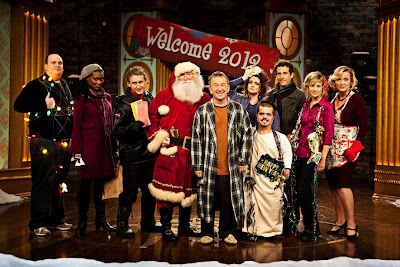 A very strange thing is happening on New Year's Day on Canadian TV.
There are actually back-to-back new hour long specials and both are 100 % Canadian.
As far as 2011 goes Canadian content virtually disappeared from some so-called Canadian TV networks. Let's hope happier days are ahead.
But CBC-TV has a new RCAF New Year's Day Special on Monday at 8 pm. that's right welcome.
And at 9 p.m. Ron James roars back with his own take in his New Year's Edition.
Both specials normally run on New Year's Eve but would anybody expect CBC-TV to give up top-rated NHL hockey for even one night? Not me!
James has been fabricating these specials for six years now and has got the format down part.
First of all he's resolutely Canadian from his Maritime twang to his insistence on sending up the mundane details of Canadian lives.
I'm honor bound not to give away his best lines but he goes right after the obesity epidemic in the States and especially that heavily sugard breakfast cereal for kids with the vampire on the box.
Michael Ignatieff diesn't get off Scott free --James jokes that after leading the LIberals to their worst ever electoral defeat Iggy is not teaching political science at U of T.
Joining James are two icons of Canadian TV: Sonja Smits whose feat of three hit Canadian TV drama series in a row must be some kind of record: Street Legal, Traders, The Eleventh Hour.
But since Canadian networks ditched Canadian TV movies and most Canadian TV dramas that couldn't be peddled to the U.S. as American fodder she's been rightly concentrating on stage.
Also on the show but not in the same sketch is her Street Legal co-star Eric Peterson who recently finished dazzling us as one of the prairie funsters in Corner Gas.
James gives Peterson some droll moments as Sir John A. Macdonald in an inspired take off on Murdoch Mysteries set in a beautifully oaken paneled room that also presents Sir Wilfrid Laurier in a funny murder mystery with that comic twist.
James stars as nineteenth century detective Mordecai Moncton--this is such a hoot maybe James should spring out this character into a regular series of his own.
After al;l James one starred in the unhistorical adventures of a British fortress titled Blackfly. Anybody remember that one?
Smits is more to the point garbed in dazzling red and looking more than a little like Lisa Laflamme as she reads the riot act against meek and mild James for shooting up a certain jolly, bearded gentleman whose only offense was riding through the sky.
One reason why these skits work so well: there are many quick cuts to the audience with huge close ups of people laughing heartily.
It's like in the radio days when Jack Benny would strategically place hearty laughters in his studio audience.
Watching other people laugh just makes the rest of us giggle.
James doesn't do just one monologue, he does three artfully spliced throughout the hour.
And, yes, there's also a visit from Aunt Vivien who delivers her annual message to the royal family. She does get quite rude when addressing the problem with Princess Kate's sister's "caboose". And there's a requisite "Little Ronnie" animated bit.
And finally comes a big and bright hugely staged musical number to welcome in the New Year.
In short a Canadian TV show for all Canadians. Imagine that.
THE RON JAMES SHOW: NEW YEAR'S EDITION IS ON CBC-TV SUND. JAN 1 AT 9 P.M.
MY RATING: ***1/2.
Posted by james bawden at 10:25 PM