The Battle Of Britain Springs Alive! 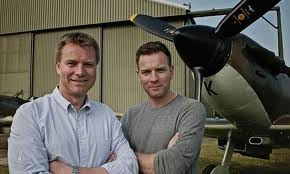 Make time to watch the new 90-minute documentary The Real Battle Of Britain which is on Discovery World HD Saturday July 2 at 8 p.m.
These events of more than 70 years suddenly spring to life as hosted by Ewan McGregor and older brother Colin. Together they take us on a brilliant journey that combines actual footage, interviews with surviving veteran pilots and recreations of what it must have been like to fly actual Spitfires and Hurricanes.
The special was actually made by Scottish Lion Television for BBC to run last year on the 70th anniversary of the historical air battles (in 1940).
The special really works for me because it fills in a lot of details I didn't quite understand.
Giving their impressions are veterans who were in their 20s back then --the eldest these days is a quick witted 97-year old.
Over 3,000 pilots were part of the heroic "First Of The Few" and 544 died in pitched battles --some 200 drowned in the English Channel before they could be rescued.
Colin is the perfect companion to Ewan because he always wanted to be a RAF pilot based on the exploits of the Spitfire pilots he'd heard about as a boy.
And Colin gets training in flying both Spitfires and Hurricanes which was rather difficult for a pilot skilled in modern jets.
Documentary footage helps reconstruct those days from June 1940 when a jubilant ADolph Hitler marched around Paris to his decision in August to bomb the RAF into submission. And the archival finds are wondrous --one pilot was Nigel Rose who described what it felt like to shoot down a German plane for the first time --and we see that actual footage from the archives (his plan had a fixed camera attached).
Experts take us through the variances in the Spitfire and the Hurricane and. In the Battle of Britain there were as many as 1,700 Hurricanes compared to the more famous Spitfire.
We visit the ruins of Biggin Hill, the biggest RAF base in the south, battered repeatedly by Goering's German air force. One pilot remembers scrambling up to five times a day. But Goering's decision to switch to the Blitz was a strategic mistake that eventually allowed the RAF to regroup and return to battle.
I like the interviews with the few veterans remaining (only 100 or so are still alive). They're quick witted, able to conjure up events of 70 years ago, and so casually heroic it's a shock at first --but they saved the British Empire and as the gigantic headstone at Biggin Hill reveals many were Canadians.
The Real Battle Of Britain just might entice younger viewers to watch and learn based on Ewan McGregor's considerable movie fame.
THE REAL BATTLE OF BRITAIN PREMIERES ON DISCOVERY WORLD HD ON SAT. JUKY 2 AT 8 P.M.
MY RATING: ****.
Posted by james bawden at 11:36 PM