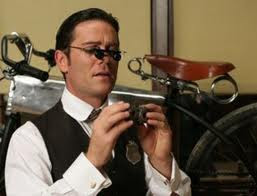 The first Inspector Murdoch I knew was reliable Canadian actor Peter Outerbridge.
He starred in three highly regarded Inspector Murdoch TV movie mysteries shot in 2004 and 2005 with Winnipeg of all places standing in for Victorian Toronto.
At the time the idea was to continue the adventures as TV movies but citytv was desperate for a Canadian series and made a 13 episode show order.
Trouble was Outerbidge already had a series job with Shaftesbury Films on the intellifgent sci fi series ReGeneris and couldn't fit in a second series within that year. In fact I heard Outerbridge tell TV critics at one Global press scrum that of the two series he'd rather be doing Murdoch.
A casting call resulted in the fortuitous substitution of Yannick Bisson who has been front and center throughout the three seasons. Filming moved to Toronto's East end studios but for this fourth season the fantastic police precinct set had to be dismantled and moved elsewhere -the East end studios are shuttered.
In early years there was location work done in Cambridge but the fourth season used Toronto and Hamilton locations --Prime Minister Stephen Harper and his daughter visited the set--he has a cameo as a constable.
It's hard for me to believe it but the ultra handsome Bisson is now 42. I may have been the first reporter to interview him way backin 1984 when he was a good looking kid getting his big break on the TV movie Hockey Night starring Megan Follows and Rick Moranis.
It was Bisson's quiet demeanor that was startling and his ability to project both intensity and sincerity.
I certainly do remember him in the 1986 TV drama Brothers By Choice although the 1988 series Learning The Ropes was a setback.
He replaced another actor in the 199 series Nothing To Good For A Cowboy and made the 2000 series Soul Food which I missed and Sue Thomas F.B. Eye which showcased his talent for dominating every scene he's in.
In short he has worked hard to become a dependable TV series actor and it shows in Murdoch Mysteries.
The first new episode introduces a new pathologist (Paul Rhys) as Dr. Llewellyn Francis with a disdain for everything colonial, and has Murdoch trying to solve a very violent murder in which the victim's limbs were severed and placed in concrete.
Murdoch's trusted pathologist and confidant Dr Julia Ogden has left for a better opportunity in --gulp --Buffalo.
Don't laugh but Buffalo in those days was several times larger and more important than Toronto.
Guesting is none other than Canadian character star Victor Garber who plays Mirdoch's predecessor on the force and is called in to help solve the gruesome murder. Don't forget in those palmy days any sort of murder was unusual. The city was then known as Toronto The Good.
I remember chatting up creator Maureen Jennings on the set in 2008 --weeks later she was swept out to sea off the coast of Florida and was lucky to survive. On that day she talked about getting the details just right and how that makes for a very expensive show. But she didn't want the Victoriana to completely take over --it was still the plot that would cause viewers to stay tuned.
And executive producer Christine Jennings made a good call by importing British guest stars whose presence meant she could peddle the series to a British network now titled Alibi.
Still, most viewers watch for Bisson's take on Murdoch. Unlike other teen stars he didn't drift on but hunkered down to learn his craft and has been growing and improving as an actor for 25 years.
THE MURDOCH MYSTERIES' FOURTH SEASON PREMIERES IN CITYTV TUESD. JUNE 7 AT 9 P.M.
MY RATING: *** 1/2.

"Ultra handsome" is right! I'd watch any episode just to look at Yannick Bisson! However tonight's CTV episode was well worth watching even just for the mystery and fine actors supporting Inspector Murdoch. The settings are interesting. I felt lucky to have caught it tonight.