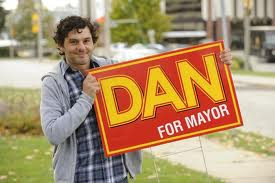 After Corner Gas expired two new comedies emerged.
Part of the CG cast (Brent Butt, Nancy Robertson) co-starred in the new sitcom hiccups which premiered its second season last week.
And Sunday night at 7:30 there's the second season debut of Dan For Mayor starring CG alumnus Fred Ewanuick and executive produced by CG's Mark Farrell.
Of the two I rather like Dan For Mayor better. It's had fewer problems in getting a storyline down and establishing key funny characters around lead Ewanuick.
The premise was weird and wonderful. Dan Phillips became mayor of the small Ontario city of Wessex by accident.
And now Dan is mayor only to find himself spectacularly under equipped for just about every function he must perform as mayor.
In devising the format Farrell and fellow exec producers Paul Mather and Kevin White have whether they like it or not constructed a sort of classic comedy.
Not to be rude but Ewaniuck is really Mary Tyler Moore here --he's the everyman who may be slightly dense but is surrounded by crazies who are far funnier. We see the plot unfolding through his eyes and gauge his reactions with ours.
The show in its second year seems to move better, lines are better written and the talented cast are through feeling their way into their characters.
In the first new episode Claire (Mary Ashton from Heartland) returns to the city as a wiser girl determined to make it in PR in the very small city.
She thought she might take time off to ponder her future but a series of accidental meetings means she finds herself with a new company Kendall And Associates smack dab in the same office complex as ex-fiance Mike.
Benjamin Ayres is spot on as this boyfriend, a clunky guy who always gets everything messed up. Now Mike is very funny in small doses.
Then there's Fern (David Ferry), the friendly barttender who sold his bar Fern's to Jeff ( (Paul Bates) who is Dan's best friend from childhood days. And Laurie Murdoch is the senior bureaucrat trying to keep Dan in tow.
I enjoyed chatting with Ewanuick on the phone from a B.C. rink where he was playing hockey with his mates.
"I agree I had great luck with Corner Gas," he said. "We all did. After the first episode got over a million viewers we were all phoned by (CTV president) Ivan Fecan.
And that kind of response never dimmed over the series' five top-rated seasons.
A combination of good writing and impeccable casting made this one Canadian TV's best ever situation comedy.
It was only natural there'd be pressure from CTV to keep a good thing going. And indeed as Butt told me only a few days ago there may yet be a movie edition coming up sooner than later.
Or how about Corner Gas: The Musical? After Glee's success it's like anything goes.
In CG Fred was far funnier than he is on Dan For Mayor and that's deliberate. Here he's front and center in many more scenes and often must play straight man to the characters around him.
"It's been an adjustment," he acknowledges about the first season. "I think we came back and are far more into our characters and that shows in everything being more polished."
In the first new episode Dan promises to name the new rink after a local hockey legend. Directed by Ron Murphy, the pacing is assured and there are some big laughs.
But even better is the second new episode, The Trash Compact, as Dan wants Wessex to go green and arranges with the city next door, Glenbridge, to take all of Wessex's garbage,. Murphy directs again but whole scenes are stolen by Kathleen Phillips as the wacky fellow mayor who keeps a pet goat and repeatedly states "I'm not kidd-ing" Get it?
Ewanuick says two episodes are shot at once for a shooting total of eight days. Interior sets are at a Toronto studio but exteriors are shot in Waterloo, Kitchener and Hamilton --parts of the Wessex city hall are in both Kitchener and Waterloo.
Let's hope the fine tuning continues. So fart an alternate universe such as existed in Corner Gas seems achievable. Each episode is getting easier to watch.
And some of these characters are already growing on me.
THE SECOND SEASON OF DAN FOR MAYOR PREMIERES SUNDAY JUNE 5 AT 7:30 P.M. ON CTV.
MY RATING: ***.
Posted by james bawden at 12:19 AM